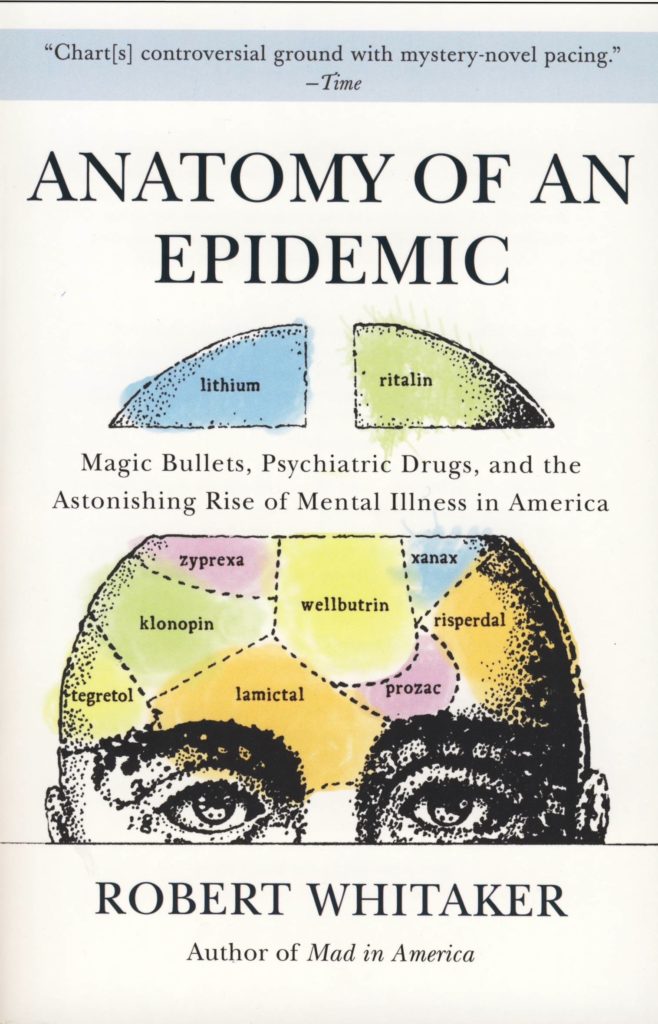 An “enthralling and frighteningly persuasive book . . . one whose astonishing intellectual punch is delivered with the gripping vitality of a novel.”

The modern era of psychiatry is usually said to have begun with the introduction of Thorazine into asylum medicine in 1955. This kicked off a “psychopharmacological revolution,” or so our society is told, with psychiatry discovering effective drugs for mental disorders of all kinds. In 1988, the first of the “second-generation” psychiatric drugs–Prozac–was introduced, and these new drugs were said to represent another therapeutic advance. Yet, even as this “psychopharmacological revolution” has unfolded over the past 50 years, the number of people disabled by mental illness has soared.

In 1955,  there were 355,000 adults in state and county mental hospitals with a psychiatric diagnosis. During the  next three decades (the era of the first generation psychiaric drugs), the number of disabled mentally ill rose to 1.25 million. Prozac arrived on the market in 1988, and during the next 20 years, the number of disabled mentally ill grew to more than four million adults (in 2007.) Finally, the prescribing of psychiatric medications to children and adolescents took off during this period (1987 to 2007), and as this medical practice took hold, the number of youth in America receiving a government disability check because of a mental illness leapt from 16,200 in 1987 to 561,569 in 2007 (a 35-fold increase.)

The astonishing increase in the disability numbers during the past fifty years raises an obvious question: Could the widespread use of psychiatric medications–for one reason or another–be fueling this epidemic? Anatomy of an Epidemic investigates that question, and it does so by focusing on the long-term outcome studies in the research literature. Do the studies tell of a paradigm of care that helps people get well and stay well over the long term? Or do they tell of a paradigm of care that increases the likelihood that people diagnosed with mental disorders will become chronically ill?

This website is designed to provide readers of Anatomy of an Epidemic with access to the key studies reviewed in the book.