To assess the merits of psychiatric drugs, it is helpful to understand how they “act” on the brain, and how the brain responds to the presence of the drug.

There are an estimated 100 billion neurons in the brain. Messages are passed along neuronal pathways in the brain via molecules, known as neurotransmitters, that act as “chemical messengers.”

This binding action either causes the second (receiving) neuron to fire or inhibits its firing. An excitatory response passes the message along the neuronal pathway; an inhibitory response dampens this neuronal activity. To end the message, the chemical messenger is then “transported” back into the first neuron and stored for later re-use.

In the 1960s, researchers discovered how antipsychotics and antidepressants interfered with this messaging process, and their discoveries led to a hypothesis that mental disorders are due to chemical imbalances in the brain, which are then “fixed,” or put back to normal, by psychiatric drugs.

For example, antidepressants were found to increase levels of the neurotransmitter serotonin in the brain, and thus researchers hypothesized that depression was due to too little serotonin. Antipsychotics were found to block dopamine pathways in the brain, and so researchers hypothesized that schizophrenia was due to too much dopamine.

To test these hypotheses, researchers conducted studies to determine whether people with depression had too little serotonin in their brain, or whether people with schizophrenia regularly had too much dopamine activity. Decades of research failed to provide the confirming evidence.

In 2005, Kenneth Kendler, coeditor in chief of Psychological Medicine summed up these research findings in this succinct way: “We have hunted for big simple neurochemical explanations for psychiatric disorders and have not found them.”

A paradigm for understanding psychotropic drugs

In a 1996 paper, then National Institute of Mental Health (NIMH) director Stephen Hyman provided a good description of how psychiatric medications actually “work.” The drugs are better understood as agents that create abnormalities in brain function.

For instance, if a drug raises serotonin levels, the brain decreases its own serotonergic activity. If a drug blocks dopamine receptors, then the brain increases its dopaminergic activity. And so forth. At the end of this compensatory process, Hyman wrote, the brain is now functioning in a manner that is “qualitatively as well as quantitatively different from the normal state.”

This is the critical element to understand: all psychiatric drugs perturb the normal functioning of neurotransmitters, and this leads to compensatory changes that leave the brain functioning in an abnormal manner.

The first-generation antipsychotics (FGAs) block dopamine receptors, and thus thwart the normal transmission of messages along dopaminergic pathways to three areas of the brain: the frontal lobes, the limbic system, and the basal ganglia. In response, the brain increases the density of its dopamine receptors. It is now said to be “supersensitive” to dopamine. 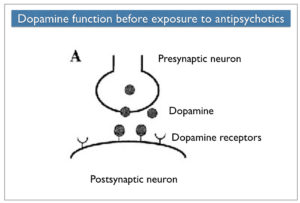 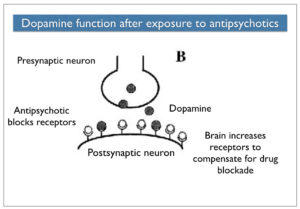 The second-generation antipsychotics (SGAs), which were marketed as “atypical antipsychotics,” are all broad-acting agents. In addition to blocking dopamine receptors, they may also bind with serotonergic, histaminergic, adrenergic, and muscarinic receptors. For the most part, the second-generation antipsychotics thwart the passage of messages along these various neuronal pathways, triggering an avalanche of compensatory adaptations in the brain. Because these drugs are so broad-acting, there is little understanding of all the compensatory changes they cause.

Selective serotonin reuptake inhibitors (SSRIs) work by blocking the normal reuptake of serotonin from the synaptic cleft, and thus this neurotransmitter stays longer in that gap than normal. As such, it is thought to increase serotonergic activity. 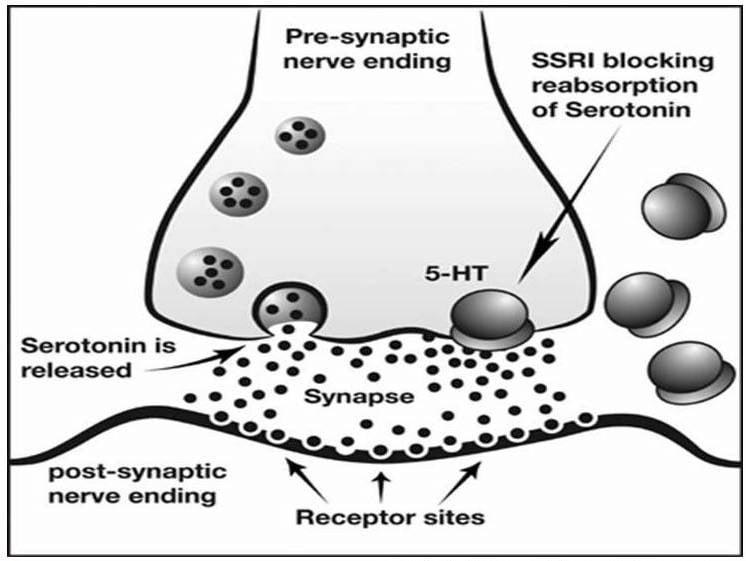 Serotonin is a very common neurotransmitter. In response to this “perturbation,” the brain decreases its own serotonergic activity. Brain neurons begin to release less serotonin and, within a short period of time, the entire pool of serotonin in the forebrain declines. In addition, neurons decrease the density of their brain receptors for serotonin. Chronic treatment with an SSRI may lead to a 50% reduction in serotonin receptors in the brain. At that point, the brain has become “desensitized” to serotonin.

SNRI antidepressants block the normal reuptake of both serotonin and norepinephrine, and as such, the expectation would be that the brain, because of its compensatory mechanisms, would become desensitized to both of these neurotransmitters.

Dopamine is a major “neurotransmitter” in the brain, and in compensatory response to such treatment, the brain decreases its own dopaminergic functions. Brain neurons may begin to release less dopamine and decrease the density of their brain receptors for dopamine; there is evidence that the number of dopaminergic neurons may decrease too.

A benzodiazepine binds to the GABA receptor on the neuron, and in so doing, amplifies GABA’s inhibitory effects. It pushes down on the GABA brake, so to speak, and as a result, a benzodiazepine suppresses central nervous system activity.

In response to a benzodiazepine, the brain decreases its output of GABA and decreases the density of its GABA receptors. As a result, the brain’s “braking” system is now in a physiologically reduced, or impaired, state.