It seems paradoxical that drugs that ameliorate acute psychotic symptoms over the short term will increase the likelihood that a person diagnosed with schizophrenia will become chronically ill. But that disturbing fact showed up in the very first outcome studies, and has continued to show up in outcome studies ever since.

This NIMH study looked at one-year outcomes for 299 patients who had been treated either with neuroleptics or placebo upon their admission to a hospital. This was the first long-term study conducted by the NIMH, and the researchers found that patients who received placebo “were less likely to be rehospitalized than those who received any of the three active phenothiazines.” However, in spite of this finding, which the researchers wrote “was so unexpected,” the NIMH investigators stated that they “were unprepared to recommend placebo as treatment of choice.” (See page 991).

b)  Discontinuation of Chemotherapy for Chronic Schizophrenics. Prien, R. Hospital and Community Psychiatry, 22 (1971), 20-23.

In this 1977 NIMH study, 49 schizophrenia patients placed into an experimental hospital program that provided them with psychosocial support were randomized into drug and non-drug cohorts. Only 35% of the non-medicated patients relapsed within a year after discharge, compared to 45% of those treated with medication. The medicated patients also suffered more from depression, blunted emotions, and retarded movements.

b. Are There Schizophrenics for Whom Drugs May be Unnecessary or Contraindicated?Rappaport, M. International Pharmacopsychiatry, 13 (1978), 100-111.

In this 1978 study,  Maurice Rappaport and his colleagues at the University of California, San Francisco randomized 80 young male schizophrenics admitted to Agnews State Hospital to drug and non-drug groups. Only 27% of the drug-free patients relapsed in the three years following discharge, compared to 62% of the medicated group. Most notably, only two of 24 patients (8 percent) who weren’t medicated in the hospital and continued to forgo such treatment after discharge subsequently relapsed. At the end of the study, this group of 24 drug-free patients was functioning at a dramatically higher level than drug-treated patients.

During the 1970s, the head of schizophrenia studies at the NIMH, Loren Mosher, conducted an experiment that compared treatment in a homelike environment (called Soteria), where antipsychotics were minimally used, to conventional treatment in a hospital setting. At the end of two years, the Soteria patients had “lower psychopathology scores, fewer (hospital) readmissions, and better global adjustment” than those treated conventionally with drugs in a hospital setting. Only 31% of the patients treated without drugs in in the Soteria House who remained off neuroleptics after leaving the program relapsed over the next two years.

6. The cure may be worse than the disease

In 1977, Jonathan Cole, the former head of the NIMH Psychopharmacology Service Center, concluded that given the myriad of problems caused by antipsychotic medications, “every chronic schizophrenic outpatient maintained on an antipsychotic medication should have the benefit of an adequate trial without drugs.” He titled his article “Is the Cure Worse than the Disease?”

In the late 1970s, Canadian investigators identified the biological changes caused by antipsychotics that lead to the high relapse rates. Because the drugs dampen dopamine activity, the brain tries to compensate by becoming “supersensitive” to dopamine. In particular, the drugs trigger an increase in the density of dopamine receptors. This perturbation in dopamine function, over the long term, makes the patients more biologically prone to psychosis and to worse relapses upon drug withdrawal. The researchers concluded: “Neuroleptics can produce a dopamine supersensitivity that leads to both dyskinetic and psychotic symptoms. An implication is that the tendency toward psychotic relapse in a patient who has developed such a supersensitivity is determined by more than just the normal course of the illness.”

Since 1980, there have been a number of long-term outcome studies that confirm the fact that antipsychotics increase the likelihood a person will become chronically ill.

The first World Health Organization study that compared schizophrenia outcomes in “developed” and “developing” countries was called The International Pilot Study of Schizophrenia. It began in 1968 and involved 1202 patients in nine countries. At both two-year and five-year follow-ups, the patients in the poor countries were doing much better. The researchers concluded that schizophrenia patients in the poor countries “had a considerably better course and outcome than (patients) in developed countries. This remained true whether clinical outcomes, social outcomes, or a combination of the two was considered.” Two-thirds of the patients in India and Nigeria were asymptomatic at the end of five years. The WHO investigators, however, were unable to identify a variable that explained this notable difference in outcomes. See pages 132, 142, 143.

b) Schizophrenia: Manifestations, Incidence and Course in Different Cultures.Jablensky, A. Psychological Medicine, supplement 20 (1992):1-95. 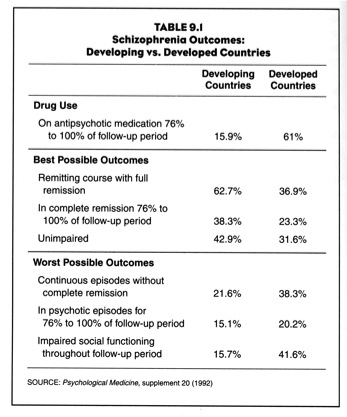 10. A meta-analysis of the outcomes literature.

In 1994, Harvard Medical School researchers reported that outcomes for schizophrenia patients in the U.S. had declined since the 1970s, to the point they were no better than they had been in 1900. Although the researchers did not blame antipsychotics for the poor outcomes, it is notable that this decline occurred during a period when American psychiatrists began telling the public that people diagnosed with schizophrenia had to stay on the drugs for life. In other words, the decline coincided with the adoption of a paradigm of care that emphasized lifelong drug therapy.

b) Neuroleptics in Progressive Structural Brain Abnormalities in Psychiatric Illness. Madsen, A. The Lancet 32 (1998):784-785.

a) Factors Involved in Outcome and Recovery in Schizophrenia Patients Not on Antipsychotic Medications. Harrow, M. Journal of Nervous and Mental Disease, 195 (2007): 407-414.

NIMH-funded researchers followed the long-term outcomes of schizophrenia patients diagnosed at two Chicago-area hospitals in the late 1980s, and they found that at the end of 15 years, 40% of the schizophrenia patients who had stopped taking antipsychotics were recovered, versus 5% of those who had stayed on the drugs. Long-term outcomes for patients with “other psychotic disorders” were also much better for those off the drugs than for those who stayed on the medications. 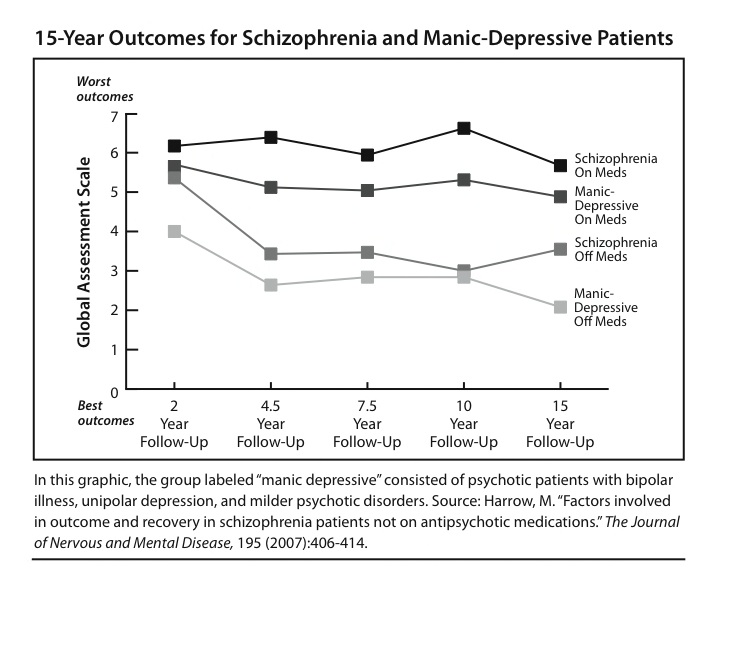 The evidence for antipsychotics

Outcomes in the era of atypical antipsychotics