Over a number of our blogs on Nutrition and Mental Health, we have reported on research that explains why nutrients may be important for treating mental illness. Some research we described is old and therefore sometimes lacking in the rigorous designs we have become accustomed to reading about these days, and other research follows the current gold standard of randomized controlled trials to try to answer difficult questions about whether a treatment is effective or not. However, there is a class of “naturalistic” research that can only be conducted if the researcher happens to be in the “right” place at the “right” time. Here we tell one of those stories.

Julia lives on the South Island of New Zealand, one of the most scenic places on earth. One reason it has such stunning scenery is because of earthquakes and volcanic activity over thousands and thousands of years, shaping and carving a landscape of lakes, mountains, and rivers. On September 4th 2010 at 4:35am, a 7.1 earthquake struck just outside the city of Christchurch, the largest city on the South Island. Despite enormous destruction of property, no one died as a result of that earthquake.

However, the event provided researchers in the midst of conducting experiments, the opportunity to use the event to explore the before and after effect of whatever they happened to be researching at the time of the quake. Julia was running clinical trials using micronutrients to treat Attention-Deficit/Hyperactivity Disorder (ADHD) in adults. She happened to be at a stage in the research where some people were taking nutrients (in the form of EMPowerplus™), and others were not, simply depending on the phase of the trial a person happened to be in at the time of the quake. She and her research team contacted all current and past participants and established whether they were taking micronutrients and for how long, and then they assessed how anxious, depressed and stressed people were one and two weeks post-quake (labelled Time 1 and Time 2 in the graph below). There were about 1000 aftershocks during this period. 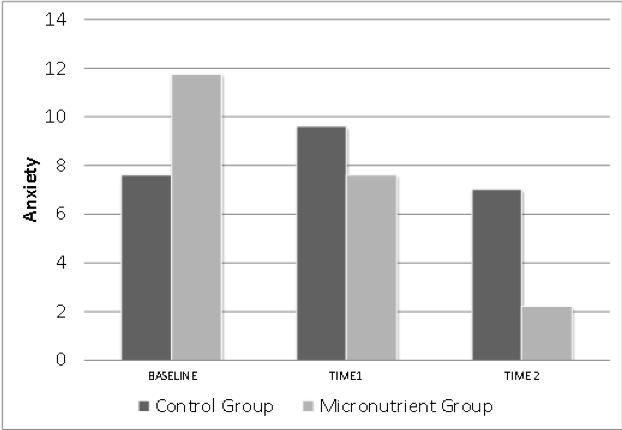 The earthquakes settled down a bit and Julia returned to her other clinical trials. Then another major earthquake hit on February 22, 2011 at 12:51 pm. And this one was on a different scale of disaster; people died, buildings collapsed, the central city was destroyed. Although not the same magnitude as the first one (this one was a 6.3), it was very shallow, underneath the city and far more violent. A different opportunity arose for research.

To first understand the context, Julia’s house was severely damaged, the University of Canterbury (where she works) had closed all buildings for inspection and opened tents on campus to teach from. Julia and her family moved into a university house where she could primitively continue to do her trials. Within that context, she and her research team designed an on-line clinical trial whereby they could compare two different micronutrient formulas (Berocca™ and EMPowerplus™) with one of them at two different doses. Ninety-one people were randomized to these three arms. Twenty-five people served as a nonrandomized control group. All participants were interviewed once to review consent and to give them their nutrients. They were then followed weekly over the internet. The study was completed in a 3 month period.

The results were consistent with the first one. Nutrients helped many people recover from the stress associated with this major natural disaster. The higher dose (8 capsules) had some advantage in that more people in that group reported greater improvement in mood, anxiety, and energy with twice as many reporting being “much” to “very much” improved and five times more likely to continue taking EMPowerplus™ post-trial than the Berocca™ group.  Those taking the combination of minerals and vitamins (EMPowerplus™) also reported less intrusions after the 4 weeks related to the trauma than the Berocca™ group. The nonrandomized control group showed little change in symptoms over time. The mean rates of Post-Traumatic Stress Disorder (PTSD) in the treated groups dropped from 65% to 19%. There was no change in the untreated group (stayed at about 50%). See the figure below on percentage rates of PTSD across the four groups before and after the 4 week trial.

So why might this work? We have a few thoughts. It could of course be a placebo effect but this is unlikely to explain all the changes observed simply because Berocca™ has been shown in three well conducted RCTs to be better than placebo at treating stress and anxiety. In the drug world, once a treatment has been shown to be better than placebo, it is typical to then do comparison trials (that is one medication versus another one that has been shown to be better than placebo). There was also on-going stress throughout the trial (the city had 2 more earthquakes over a magnitude 6 during the time of data collection) and therefore stress was unlikely to reduce naturally on its own during the acute period (and the untreated group shows that this was the case). It is possible that the treatment compensated for compromised nutrient intake given that people eat less nourishing food at a time of disaster. But the explanation that makes the most sense and explains the benefit received by those taking nutrients really well comes from McCann and Ames who put forward the “triage theory” a few years ago. The triage theory states that: “…when the availability of a micronutrient is inadequate, nature ensures that micro-nutrient-dependent functions required for short-term survival are protected at the expense of functions whose lack has only longer-term consequences…”

In other words, in times of stress, our body’s reserves and nutrients are used up in the fight- flight response and there is simply less available for the rest of the body and the brain to function optimally. Additional nutrients replenish these depleted stores. These factors, in combination with research showing that food choices at times of stress tend to be of lower nutritional value, further compounding the problem.

So… the bottom line… if you are ever in a natural disaster, eat as well as possible and take additional nutrients.

Kennedy DO, Veasey R, Watson A, et al. Effects of high-dose B vitamin complex with vitamin C and minerals on subjective mood and performance in healthy males. Psychopharmacology (Berl) 2010;211:55-68.