From The Detroit News: “An MSU psychologist with ties to the Larry Nassar scandal has permanently surrendered his license to treat patients, state officials said Friday.

The Michigan Department of Licensing and Regulatory Affairs said it issued a consent order against Gary Stollak, who retired from MSU in 2010, in which he surrendered his psychology license.

The order was issued after the agency investigated allegations that Stollak failed to inform authorities about Nassar’s abuse of a patient, a minor. The order was approved Thursday by the Disciplinary Subcommittee of the Board of Psychology, officials said.

Nassar, 55, a former Michigan State University and USA Gymnastics doctor, was convicted last year of sexually abusing girls under the guise of medical treatment and sentenced to up to 175 years in prison.” 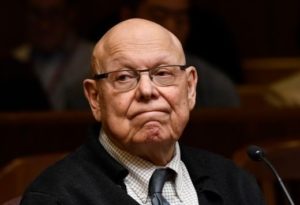