From ACEs Connection: “After three days of inspiring presentations, panel discussions and breakout sessions at the National ACEs Conference, the crowd of 850 people was eager to hear from two of the ACEs movement’s pioneers: Dr. Vincent Felitti and Dr. Nadine Burke-Harris.

During a luncheon plenary on the last day of the conference, which was held Oct. 15-17 in San Francisco, Felitti related a story about what happened when he first broached the subject with colleagues of asking patients to fill out a questionnaire that included questions about their childhood trauma. They thought he was crazy, he said.

‘They thought [the patients] would decompensate,’ he told a packed ballroom.

His story was an example of how paradigm shifts in science go hand-in-hand with the push-pull of deep resistance to change. What accelerates acceptance is when convincing and persistent champions have gathered clear and convincing evidence, share it, and it lays the stepping stones for a national movement. For the ACEs movement, Felitti and Dr. Robert Anda, his co-principal investigator in the groundbreaking CDC-Kaiser Permanente Adverse Childhood Experiences Study, are two of those people.” 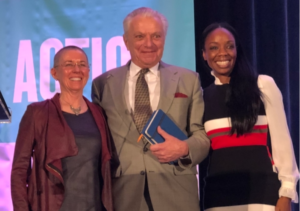