From the International Journal of Mental Health: “In my mind I replayed this scene of his final question over and over again. Instead of formally and dryly answering, and escaping to find refuge in ice cream, in my replay, I would take his hand in mine and sit with him on the living room sofa. I would put my short arms round his neck and kiss his face again and again: his eyes, his cheeks, his forehead, and particularly his right temple, and I would rock and soothe him with warm sweet words. ‘I love you very much, Father. We all love you very much. We know that you are going through hell and that you believe that you have no right to exist; that you think you are disrupting our lives; that you are afraid that at work they will give up on you and fire you and that we would then become dependent on welfare benefits. But everything can still be fixed and after darkness a light always comes, and there is a beautiful world out there waiting for you as well. If only you would let our love in, you would have an excellent chance of healing.’

But in the last days of his life, father was not surrounded by love. We behaved like drowning people who, wishing to survive, leaned with all their might on each other, wildly flapping our hands and kicking our legs in an attempt to raise our heads above the surface and breathe some fresh air. My father, who was already very ill, emerged at times from the bedroom, as pale as a ghost, his disturbed soul evaporating from moment to moment, and considered himself a dead man. […]

I tried to forgive my father for choosing to commit suicide in front of our very eyes, although I will never understand why he did so. His own father was shot in front of him during the death march, and that event was at the heart of his own personal tragedy. He suffered guilt for having survived while his parents did not, and for living in relatively better conditions in Auschwitz than did his father. It is surprising that he chose to ‘bequeath’ the fundamental trauma of his life to us too, complete with the guilt for not being able to support and save him. Did he think that that way we would be able to understand him better? Was he at all capable of thinking about us in his condition?

In 1998, I visited my father’s grave for the first time. On the tombstone there is a verse from the Book of Jeremiah: ‘His word is in my heart like a burning fire, shut up in my bones, I am weary of holding it in; indeed, I cannot.’ Suicide is not just a kind of private euthanasia, but also an unavoidable need in view of the raging fire blazing in a person’s inner world. Is it possible to extinguish the fire in time? Those who love the sufferer need to be highly attuned to signals of distress that are indicative of a suicidal tendency and attempt to ease that person’s distress by any available means.” 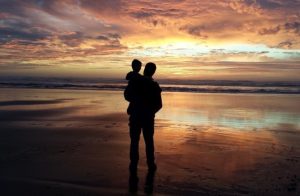