From The Atlantic: “Researchers surveyed roughly 500 economics Ph.D. candidates at eight elite universities, and found that 18 percent of them experienced moderate or severe symptoms of depression and anxiety. That’s more than three times the national average, according to the study. Roughly one in 10 students in the Harvard survey also reported having suicidal thoughts on at least several days within the prior two weeks. (Other recent studies have had similar findings, including one published earlier this year that described graduate-student mental health as a ‘crisis.’) […]

And then there is the academic pressure itself. Graduate education relies on ‘this idea that we have to produce, produce, produce, or do a lot more labor than others, so we’re worn quite thin,’ says Johnson, noting that such labor is often promoted under the guise of ‘professionalization.’ […]

Compounding the pressures is the sense, at least according to the economics Ph.D. candidates surveyed by the Harvard researchers, that their work isn’t useful or beneficial to society. Only a quarter of the study’s respondents reported feeling as if their work was useful always or most of the time, compared with 63 percent of the entire working-age population. Only a fifth of the respondents thought that they had opportunities to make a positive impact on their community.” 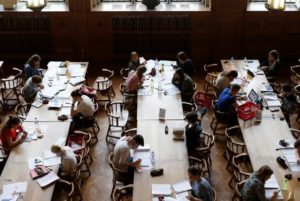