From YES! Magazine: “We live amid a loneliness epidemic where the lack of belonging and community has been linked to high suicide rates and an increased sense of despair. The United States has one of the worst work-life balance scores in the world, while more Americans have become disillusioned with organized religion, as a broad and rapidly rising demographic consider themselves spiritual but not religious. Perhaps with fewer opportunities for people to be in community, many shared cultural rituals are falling away and with them a grounding source for connection and mental health. […]

Psychologist Hobson confirms that rituals aren’t just a benefit to our mental health—they’re actually essential. ‘We are an intensely social and ritualistic species,’ he says. ‘Take this piece out of our modern human narrative and you lose a piece of our history and our humanity.’

I moved to the U.S. when I was 14. After living here for two decades, I became a mother and was confronted with the phrase, ‘It takes a village to raise a child.’ But where was that mythical village and the rituals that made it sane? For example, a pregnant woman in Iran had a rotating menu of dishes made for her by friends and family. A new mother was surrounded by people who took turns assisting with daily tasks. But in the U.S., she was expected to fend for herself and her baby immediately after childbirth. I observed that besides standard holiday traditions, community-building practices were lacking.

So after 20 years of living in the U.S., I decided to create my own community rituals.” 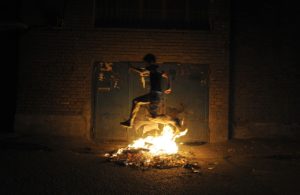