From New England Public Radio: “A growing number of communities around the country are using the trauma-informed template to preach empathy, awareness, and patience in a variety of contexts. The goal is to involve everyone in a community, from police to schools to government to nonprofits.

Haley’s dream, she said, is to have signs that say, ‘Welcome to Berkshire County. You’re entering a trauma-informed county.’ […]

Vogel, Haley and others launched the ‘Trauma-Informed Berkshires’ campaign in 2016. Their first step was to invite trauma experts to a packed public gathering at the Colonial Theater in Pittsfield.

Gillece continues to consult for communities around the country that want to become trauma-informed. She urges local institutions, from prisons to libraries to welfare offices, to rethink how they deal with the public.

‘How would we change social services — which, oftentimes you go in, and you go through the metal detector, and you’re met with oftentimes not the most welcoming receptionist,’ Gillece said. ‘It’s almost like you’re shamed for being in need. What could we do differently from that first point of contact?'” 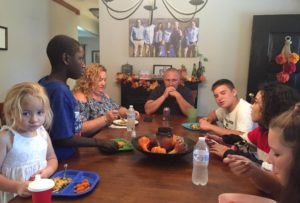