From RxISK: “Both the Scottish and Welsh Governments have been debating the issues surrounding the overuse of psychiatric drugs. They have been encouraged into action by petitions launched by those with lived experience and therapists who have witnessed first-hand the terrible difficulty that some people can have coming off psychiatric drugs.

The Welsh Assembly published their report on March 21st. Among the ten specific recommendations is the need for greater recognition to be given to prescription drug dependence at a national level in both policy and strategy. In addition, they commit to investigate, as a priority, the potential for national rollout of a Prescribed Medication Support Service in order to ensure that specific advice and support is available for people who require assistance with prescription medication. […]

In Scotland, the petitioning process has yet to reach reporting status. At its most recent meeting, the Scottish Parliament Petitions Committee agreed to defer further consideration of the petition until after the Scottish Government Short Life Working Group (SLWG) on prescription medicine dependence and withdrawal has reported its recommendations (due in 2019). The petition Committee has been urged to request that: ‘the full evidence of this petition … be taken into account by the SLWG as formal evidence of Experts by Experience.’

The Petitions Committee received an astonishing number of written testimonies from people reporting severe symptoms when stopping psychiatric drugs and full evidence is published online. A collated ‘Voice of the patient’ report has been compiled from Scottish and Welsh Petition evidence and submitted for the Public Health England review.” 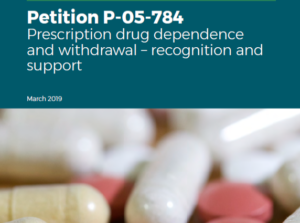