From Hawai’i Public Radio: “Images from Mauna Kea of police arresting kupuna or elders and those of protesters chained to a cattle grate can elicit strong emotions from many who see them. But for some native Hawaiians, these sights can serve as reminders of past injustices, triggering what the American Psychological Association calls ‘historical trauma.’

Video of 81-year-old Maxine Kahāʻulelio pleading with law enforcement on Mauna Kea brought tears to kumu hula and Hawaiian musician Robert Uluwehi Cazimero . . . He said it was devastating to watch. And he’s not alone, according to native Hawaiian clinical psychologist Robin Miyamoto, a professor at the University of Hawai’i John A. Burns School of Medicine.

‘You know, when I watch the videos, that ‘eha (hurt) that’s there that hits you in the pit of your stomach. That’s really something that affects people at such a deep level,’ said Miyamoto.

That ‘eha or hurt is triggered by what she calls historical trauma. Research into this type of trauma has focused on descendants of Holocaust survivors and African American slaves. Miyamoto said that trauma is similar to the feelings experienced by those dealing with the emotions stemming from developments on Mauna Kea.

‘It’s just that that person doesn’t need to have directly experienced that trauma,’ says Miyamoto, ‘It can be something that happens to their kupuna but has resulted in a loss. Whether it’s a cultural loss, a loss of land, a loss of power.’

Take the overthrow of the Hawaiian Kingdom or the suppression of the native language or ʻōlelo Hawaiʻi. Some psychologists say how native Hawaiians at the time coped with these events and communicated it to following generations can have a lasting impact on their descendants.

‘There’s this unbelievable sense of peace,’ said Miyamoto. ‘Being able to talk about their experiences, being able to be angry in a safe space, be able to cry in safe space and then let go of that and put all their energy into protecting the mauna.’

Cazimero agrees . . . He said there’s strength beneath the pain and, if everyone is lucky, that strength will rise to the surface.” 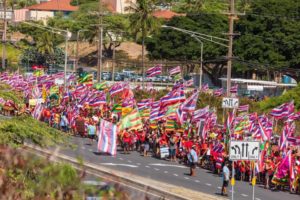