From The Seattle Times: “US HealthVest is at the vanguard of a quiet transformation in how patients receive care for mental health and drug addiction in Washington. Since 2012, the state has approved or expanded 10 private psychiatric hospitals, nine of which are for-profit. This expansion will add more than 850 inpatient beds in a state with one of the highest rates of mental illness and least capacity to treat it, holding the promise of specialized care for patients who often land in jails or hospital emergency rooms . . .

Yet the state’s early embrace of US HealthVest, after Washington’s own failures to meet patient needs, has brought a new peril into the system: a model proven to deliver profits that has routinely failed vulnerable patients, an investigation by The Seattle Times has found.

Smokey Point’s first chief executive, with no medical license, would weigh in on which patients to admit. Patients with serious medical conditions worsened while waiting for treatment that the hospital couldn’t provide. Executives failed to boost staffing despite pleas from employees and findings by regulators that conditions were unsafe.

As Smokey Point executives prepared for inspections, they repeatedly instructed nursing staff to fill in records that were incomplete or missing from patient files — even when it would have been impossible to accurately recall details, according to internal records and interviews with staffers. At another US HealthVest facility in Georgia, law enforcement accused the staff of ‘covering up their own neglect of patients’ and ‘fraudulently documenting care.’

The problems at Smokey Point — and three other of the seven psychiatric hospitals US HealthVest operates across three states — surface in a review of thousands of pages of state health and law-enforcement records, internal documents, hospital records shared by patients and their families with The Times, and interviews with roughly two dozen current and former employees.

Last year, Smokey Point’s own incident log showed 88 assaults, 33 discoveries of contraband and 26 employee injuries. It’s hard to compare this record with other private hospitals, which don’t publicly disclose incident rates, but it stood out to regulators for what was missing: other assaults, suicide attempts and medication errors that weren’t logged into the system or investigated.

Many mental-health facilities are struggling to recruit and retain qualified staff. Ensuring the safety of patients — who are often at risk of harming themselves or others — can be hard even in ideal circumstances. But no private mental-health care operator in Washington state in recent years has pushed to expand as rapidly as US HealthVest or racked up as many serious violations as quickly, records show.

Government inspectors have found violations at Smokey Point on 12 separate visits over 15 months. After meeting with senior US HealthVest executives and their attorneys, the Department of Health in June agreed not to take action against Smokey Point’s license in exchange for the company hiring a state-approved consultant, analyzing its failures, submitting an improvement plan and undergoing stepped-up monitoring for a year.

Separately, the Department of Health denied US HealthVest’s application to build a new psychiatric hospital in Bellingham.

‘They’ve demonstrated that they don’t have a good track record of being able to care for patients safely, so we’re not going to allow them to do that,’ Nate Weed, director of the Department of Health’s Office of Community Health Systems, said in an interview.

Yet the limits of this statement were on display just a 15-minute drive away from the regulator’s offices near Olympia, where US HealthVest recently opened a second psychiatric hospital. The department approved it before Smokey Point had opened its doors . . .

Many of the Smokey Point employees asked to remain anonymous because they were warned by executives not to speak to a Times reporter, or they worried it could hurt their ability to work in health care. One common complaint, confirmed by state inspections, was that the hospital was too thinly staffed to adequately care for patients.

In March of 2018, a nurse told state inspectors that there had been ‘many suicide attempts,’ including three on a single recent day. ‘It was only a matter of time until someone dies,’ the nurse said, because when patients need more staff to check on them ‘there is no one available.’

Inspectors asked the chief nursing officer about staffing and recorded this explanation: ‘corporate leadership asked him to be within budget.'” 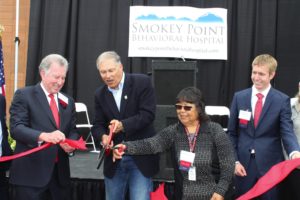