From Nature: “None of [the psychologists interviewed by Nature] would comment on their fees for speeches and consultancy work, although one US-based psychologist — who didn’t want their identity revealed by Nature, to protect their privacy — said that they get between US$10,000 and $20,000 for speaking at universities, and up to $40,000 for speaking to trade groups.

Some psychologists appear on ‘speakers’ bureau’ websites, which put potential clients in touch with speakers. One site claimed Twenge can be booked for $20,000 to $30,000; when Nature asked her about this, she said the page was ‘out of date,’ and it was deleted shortly afterwards. Another site lists Grant as available for $100,000 to $1 million. A literary agent — who has negotiated speaking fees for well-known scientists but didn’t want to be identified — says that someone of Twenge’s fame could expect between $5,000 and $15,000 per appearance. And an American motivational speaker, Dave Sheffield, says that speaking fees for ‘celebrity’ psychologists ‘begin at $10,000 and can go as high as $100,000.’

Nature examined 60 papers from the psychologists named above that were relevant to their most well-known theses and dated back no further than 2013. In almost all, researchers either declared they had no COIs or did not include such declarations. One of Grant’s papers noted that he engaged in ‘unrelated’ consultancy for a firm that funded the research. In two of Twenge’s papers about the impacts of smartphone use on adolescents’ sleep, published in Sleep Medicine3,4, there are no declarations of COIs, but the journal uploads declaration of interest forms on its website. In these forms, Twenge says that she has received money from consultancies and speakers’ bureaus ‘unrelated’ to her research, although her website says that her speaking engagements are about her research findings . . .

That chimes with what other researchers say: that psychology’s norms do not include declaring speaking fees and consultancy income. Marcus Crede, a psychologist at Iowa State University in Ames who has followed the issue, says he doesn’t think he has ever seen such a thing declared as a COI in a paper. He adds that this is particularly a problem when researchers have been severely criticized for their results but continue to earn money for talks on them, pointing to statistical concerns that have come to light in Cuddy’s power-posing research since her papers were published. ‘To ask Cuddy to be an objective reporter, and say she has no COIs, seems ludicrous,’ he says. (Cuddy, at Harvard Business School in Boston, Massachusetts, did not reply to Nature’s requests for comment.)” 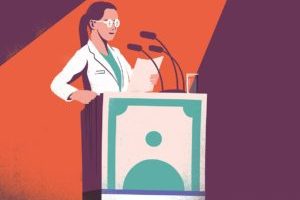