From The Guardian: “For those in mental health units, there are extra barriers to both registering and casting votes. In 2010, voter turnout was 65% in the general population; for inpatients, this figure was as low as 14%.

For some, particularly those experiencing severe distress or crisis, voting may not be a priority. But a 2012 study identified other barriers – namely that many patients simply had no idea what their rights were around registering or voting. In that study, 65% of patients eligible to vote told researchers they had an interest in voting, but 71% didn’t know how to register.

Moreover 77% were unaware they could register using the hospital’s address, an option for those who have been in hospital for an extended period, and 48% said they hadn’t known they were allowed to vote at all. Having this information would have been significant for many – 50% of those who hadn’t registered said they would have voted if they’d known how.

…’Mentally ill’ and other disabled people have a disproportionate exposure to the workings of the (often violent) state – that’s why it’s so important our voices are heard.” 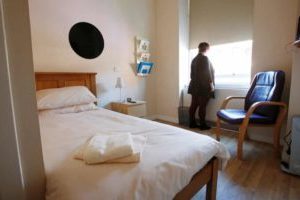