From The Washington Post: “Police officers will not face charges in the death of Daniel Prude, a Black man pinned to the ground last year while handcuffed, hooded and in the throes of a mental health crisis.

. . . Prude’s death in March — and officials’ attempts to keep footage from the public eye — fueled already intense scrutiny of police officers’ treatment of Black Americans and their handling of mental health calls. A medical examiner ruled Prude’s death a homicide caused by ‘complications of asphyxia in the setting of physical restraint,’ and experts say officers neglected to use known tactics for helping people in crisis while arresting the 41-year-old man.

. . . Responding Tuesday to the no-charge decision, Prude family attorney Elliot Shields said Prude’s loved ones are ‘baffled and confused as to how this decision [not to charge the officers] was reached.'” 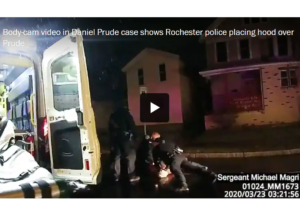