From CNBC: “A third member of a key Food and Drug Administration advisory panel has resigned over the agency’s controversial decision to approve Biogen‘s new Alzheimer’s drug, Aduhelm, CNBC has learned.

Dr. Aaron Kesselheim, a professor of medicine at Harvard Medical School, said the agency’s decision on Biogen ‘was probably the worst drug approval decision in recent U.S. history,’ according to his resignation letter obtained by CNBC.

‘At the last minute, the agency switched its review to the Accelerated Approval pathway based on the debatable premise that the drug’s effect on brain amyloid was likely to help patients with Alzheimer’s disease,’ he wrote in resigning from the FDA’s Peripheral and Central Nervous System Advisory Committee.

He wrote it was ‘clear’ to him that the agency is not ‘presently capable of adequately integrating the Committee’s scientific recommendations into its approval decisions.’

‘This will undermine the care of these patients, public trust in the FDA, the pursuit of useful therapeutic innovation, and the affordability of the health care system,’ he said.” 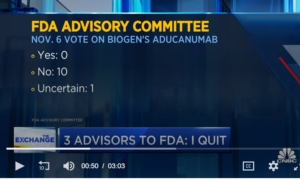