What explains the resilience of institutionalisation in the Arab world? The World Health Organization (WHO) often highlights the absence of mental health on the list of national priorities in the region, shortages in psychiatric personnel, limited funds, lack of resources, as well as lack of comprehensive mental health strategies. But political myopia, amateurish governance with short-term political agendas, and instability are in reality what makes alternative psychiatric futures impossible to conceive, let alone implement. What is more striking is the lack of a critical debate about the uncontested power of medical doctors and psychiatrists, and sometimes even their complicity with authoritarian regimes. This situation contrasts with many other countries that saw the emergence (particularly in the 1960s and ’70s) of vocal critiques of psychiatric practices, including the use of such institutions as a dumping ground for unruly members of society (be it for family or political reasons). Authoritarianism and opportunism as well as self-preservation on the part of the medical elite are also to blame; so is religious power and its monopoly on truth, the normal and the pathological.

But should we blame colonialism for such ‘inertia’, to borrow Lazali’s term? If so, are we to conclude that the people of the region are doomed to live in a state of perpetual resignation, ‘standing by the ruins’ (a common topos in Arabic poetry), weeping in silence at their destroyed homes and suspended aspirations? What is the role of ordinary citizens in sustaining oppressive, lethargic and despotic regimes instead of working for more progressive societies, reliable institutions, sustainable economies and brighter futures?” 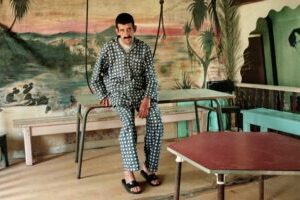