From The Conversation: “Over the past decade or so, mental health services in England have been undergoing a process of ‘Uberisation’. This refers to how services are effectively treated as commodities marketed through online platforms, changing the way they are delivered as well as making the jobs of the people delivering them more precarious – similar to the effect of ride-hailing apps on taxi drivers.

Specifically, this has happened through the introduction of a standardised and digitalised model of therapy called Increased Access to Psychological Therapies (IAPT). This Uberisation appears to be contributing to a mental health crisis within the therapy profession itself.

IAPT, which was introduced in 2008, provides psychotherapy for depression and anxiety to over a million people each year – the largest NHS programme in England. It uses a model of cognitive behavioural therapy – made up of short-term interventions of four to 12 sessions – that use techniques, such as relaxation exercises, to encourage positive mood and behaviour.

These sessions were predominantly delivered online because of the pandemic, and often in the form of guided self-help, without contact with clinicians and increasingly making use of artificial intelligence technologies, such as chatbots.

. . . In an online survey I conducted in 2019 of 650 NHS IAPT workers, 68% of respondents claimed to have experienced depression or anxiety – or both – as a result of their work and 70% experienced burnout. As one therapist working in IAPT said: ‘I have never in my life seen a more despondent group of professionals.’

. . . With these extremely high levels of depression and anxiety among therapists, there is a genuine question about patient safety that is being overlooked. If the mental health model itself is broken, are services deepening the mental health crisis, rather than solving it?” 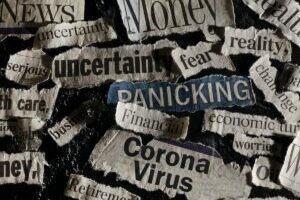