From The Guardian: “His thesis centres on trauma: the urgent work of the brain after a traumatic event is to suppress it, through forgetting or self-blame, to avoid being ostracised. But the body does not forget; physiological changes result, a ‘recalibration of the brain’s alarm system, an increase in stress hormones, an alteration in the system that filters relevant information from irrelevant’, as he says in his book. The stress is stored in the muscles and does not dissipate. This has profound ramifications for talking therapies and their limits: the rational mind cannot do the repair work on its own, since that part of you is pretending it has already been repaired.

. . . ‘We define “trauma” as an event outside the normal human veins of experience,’ he says. ‘At least one-third of couples, globally, engage in physical violence. The number of kids who get abused and abandoned is just staggering. Domestic violence, staggering. Rapes, staggering. Psychiatry is completely out to lunch and just doesn’t see this.’

. . . Psychiatrists would diagnose these patients with everything from alcoholism to schizophrenia and miss – almost resist noticing – the trauma.

. . . ‘There’s very good literature [on shellshock] from 1919 and 1920. But then there was pushback, people saying: “You’re just a bunch of cowards.” The assault on people who had been traumatised has been relentless – to this day, almost. You’re not allowed to tell the truth about the horrible things that people do to each other.’

He is a huge fan of John Bowlby, the inventor of attachment theory. ‘I knew him slightly, actually. He didn’t love me – he thought I was too impulsive. But I thought he was fantastic. Most of my colleagues haven’t read Bowlby. In psychiatry, people don’t talk a lot about attachment.’

. . . At the start of his career, he was driven by curiosity and a practical urge to find out what worked. The further he delved, the more important he realised the work was, in terms of the incidence and impact of trauma, on society and the self.

. . . Van der Kolk is adamant; people shouldn’t be left as walking wounded. No one should have to keep hurling themselves at the same brick wall of therapy and antidepressants if they are not working.

. . . Collective trauma is complicated. Taboo is a core component of PTSD. The brain buries feelings only if they can’t be spoken about, because of the risk of alienation, from a family (this is particularly relevant to abused children) or from society (this is what silences veterans). Large, shared events – 9/11, for instance – which are not suppressed, which in fact bring those affected together, do not leave the same scars.

. . . When The Body Keeps the Score was published, his editor said, perhaps because of the yoga, the drugs or the very trenchant way in which he describes trauma’s primacy and psychiatry’s myopia around it: ‘Wait until the blowback hits.’ He is still waiting. ‘I’ve had very little blowback. I find it strange. Because I know how the academic world functions and, in every academic institution I’ve been involved in, my approach has been pooh-poohed by my colleagues.’

Maybe it is not so strange. In the end, psychiatry is simply society in a white coat, the medical end of the norm-enforcement and denial of reality that drives individuals to suppress their trauma in the first place. Van der Kolk’s life in practice has been to treat traumatised patients, but his life as an author is as an emissary from the world of PTSD, confronting his profession – and the world that created it – with what is actually happening. Ultimately, psychiatry and the world that created it can cope.” 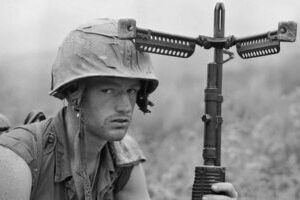