From TEDx Talks: “We’ve seen a steady increase in psychological distress among adults — in Australia and around the world. And I see this increase in distress as being rooted in part in the messages we received as children around how to express feelings and emotions.

. . . My work over the last 16 years with families around attachment, trauma and connection has shown me that there are usually three ways we learn as kids to deal with feelings and emotions.

The first way is repression. Perhaps as a child, you learnt that it wasn’t safe to express your feelings. You might have gotten shut down and told to stop crying. Or you were given a look that made you draw everything inside and push them down deep. The impact of repression on a child is that those feelings stay there.

And then as adults, those feelings can turn up again when life throws us a curveball. Those same feelings come up, but this time, we respond by having another glass of wine or spending hours mindlessly scrolling through Facebook or making ourselves so busy at work that we don’t have time to feel.

The second way is aggression. As a child if we felt really powerless or scared and we grew up in an authoritarian environment where we didn’t have a voice and couldn’t say how we felt, then those feelings would again bubble up inside us. At the point where they would tip over when we felt most frightened or threatened, then they might come out in the form of aggression, rage, loud words. You might have been labeled as ‘naughty’, ‘too much’ or ‘trouble’ when all you were doing was responding to your environment.

And then as adults, those tendencies show up in bullying behavior. Or they can turn up in harsh critical thoughts about ourselves and others. Or it can show up as violence.

The third way is expression. If we grew up with an imprint that said ‘Feelings are welcome. I will accept all of you — the happy bits, the sad bits, the joyous bits, the bits that are angry. I’m not going to try and fix them; I’m just going to hold you,’ then as adults when things feel hard, we reach for our journal and write down our thoughts. Or we call a friend and say: ‘Hey, can you listen to me?’ Or we might go for a run, do some yoga, speak to our therapist and find a way to lean into the feelings, we feel them and let them go.

. . . I’m lucky enough to understand and study trauma, and I began to see that what we need as humans is a safe place to unpack all of who we are. We need boundaries and holding, but we also need empathy and compassion for those big feelings that rise within.

. . . I realized that children can’t be what they can’t see. How do we expect them to have empathy and compassion for other people if we don’t show them how? How can we expect them to treat others with kindness and respect if they don’t know what that feels like in their own bodies? 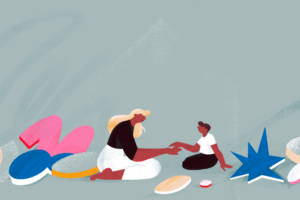