From Aeon: “We have all heard stories of sudden self-transformation, or what the US psychologists William Miller and Janet C’de Baca call ‘quantum change’, whether it’s the religious conversion of Saint Paul on the Road to Damascus, the enlightenment of Siddhartha Gautama the Buddha, addicts at rock-bottom finding God, or near-death experiences that give people a new outlook on life. But not all sudden – or seemingly sudden – changes of outlook and personality are beneficial. The onset of psychosis in particular involves a strikingly similar transformation of reality, but one that precedes a frightening descent into ‘mental illness’ . . .

What can account for the striking similarities in these sudden transformative experiences, some of which presage ‘mental illness,’ while others lay the foundation for spiritual renewal and a galvanised sense of purpose? Are these really two versions of the same underlying psychological process?

. . . Here is a major clue to the parallels between sudden psychotic episodes and religious epiphanies – it’s the mythical idea, endlessly repeated and very hard to shake, that the same struggles that can lead to spiritual breakthrough or heroic deeds also risk destroying an individual or, in other words, triggering mental dysfunction. As [hospital chaplain Anton] Boisen put it:

The conclusion follows that certain types of mental disorder and certain types of religious experience are alike attempts at reorganisation. The difference lies in the outcome. Where the attempt is successful and some degree of victory is won, it is commonly recognised as religious experience. Where it is unsuccessful or indeterminate, it is commonly spoken of as ‘insanity’.

. . . To help make sense of what is going on in all these stories of sudden transformation, the British psychologist and neuroscientist Robin Carhart-Harris and I recently introduced the construct of ‘pivotal mental states’ (or PiMSs), which we see as an evolved human capability for sudden and radical psychic change. In our paper in the Journal of Psychopharmacology in 2020, we defined PiMSs as ‘hyper-plastic state[s] aiding rapid and deep learning that can mediate psychological transformation’. We believe that the spiritual or incipient psychotic experiences that can lead to religious conversion or psychotic disorder, respectively, are both examples of PiMSs, as are the acute traumatic experiences that can lead to post-traumatic stress disorder, post-traumatic growth, or some combination thereof.” 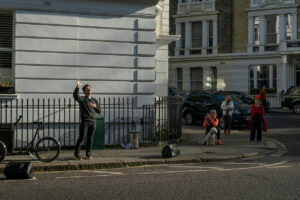