From Los Angeles Times: “Six weeks after Gov. Gavin Newsom unveiled a far-reaching effort to push more people into court-ordered ‘treatment’ for severe ‘mental illness’ and addiction, homeless advocates are calling it legally misguided and immoral as the proposal’s first public hearing at the state Capitol has been delayed.

More than three dozen organizations and individuals, including the American Civil Liberties Union, Disability Rights California and the Western Center on Law and Poverty, signed an April 12 opposition letter raising serious concerns with Assembly Bill 2830, one of two nearly identical measures moving through the Legislature to implement Newsom’s Community Assistance, Recovery and Empowerment [CARE] Court. The groups often have significant sway among liberal legislative Democrats, the kind of influence that could hinder Newsom’s hopes for a new law to be in place by July 1.

Newsom touted the CARE Court framework last month as an innovative strategy to ‘guide’ an estimated 7,000 to 12,000 people into housing and ‘much-needed treatment.’ Under the proposal, family members, behavioral health care providers and first responders, among others, could petition a civil judge to initiate a CARE plan for eligible individuals who ‘lack medical decision-making capacity.’

. . . In their 14-page letter, the advocates blasted the proposal as involuntary and coercive ‘treatment’ that would strip individuals of their personal liberties and ‘perpetuate institutional racism and worsen health disparities.’ They said CARE Court ‘flies in the face of any evidence-based approach to ending homelessness’ because it prioritizes ‘mental health services’ — not housing — as the initial step toward recovery, which they said would deviate from California’s ‘housing first’ principles.

And they argued the plan relies on a variety of concepts that are not clearly defined in the proposed legislation or in California law, which ‘will result in confusion and inconsistent application’ of CARE Courts across the state.

‘We believe that a transformational proposal like CARE Court should be thoroughly vetted by stakeholders and informed by research and data before it is adopted. That has not happened here,’ the letter says. ‘Because CARE Court will harm Californians with disabilities, experiencing homelessness, and involved in the criminal legal system, we cannot support this proposal.’

. . . ‘We vehemently oppose the proposal because it has this coercive court process implemented, and no right to housing,’ [Cynthia Castillo, a policy advocate for the Western Center on Law and Poverty] said.” 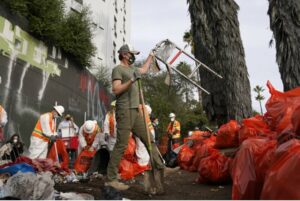