From Undark: “Before Anita was admitted to the hospital, she had gotten into a fight with her brother. After the fight, she fell unconscious. ‘It was like she lost her balance,’ her mother, Saeeda, said. (Saeeda opted to only disclose her and her daughter’s first names.) Then Anita started seizing. When she arrived at the hospital, though, doctors did not see any sign of a neurological condition or other physical cause that could explain the sudden collapse.

These mysterious ailments — often entailing loss of consciousness, convulsions, paralysis — have plagued girls and women in Afghanistan for more than a decade. Government officials, local media, and, often, the women themselves have described these events as poisonings, usually attributed to attacks by the Taliban or other militant groups. Doctors who review the cases have come to a different diagnosis: conversion disorder, also known as functional neurological symptom disorder, part of a class of conditions called somatic symptom and related disorders.

Patients with somatic symptom and related disorders experience bodily symptoms with no apparent physical cause — or an excessive response to a medical disorder. Conversion disorder is a specific form in which a patient’s physical symptoms mimic a neurological disorder. The symptoms often follow a period of significant emotional or physical distress, and they are outside of the individual’s conscious control.

. . . Herat province alone has seen tens of thousands of cases over the past decade, with girls flooding into the city’s hospitals with severe dizziness, weakness, hyperventilation, headache, fever, nausea, and abdominal pain. Others are unconscious and unresponsive. In each case, doctors could not detect a physical cause and sent the girls to the province’s psychiatric ward at Herat Regional Hospital, one of only six psychiatric wards in the country. There, the girls receive IV fluids, diazepam — a generic version of the anti-anxiety drug Valium — and, at times, sedatives. Sometimes, the hospital administers electroconvulsive therapy. After 24 hours, the majority of the girls reawaken, and the hospital sends them home.

Since the Taliban took control of the country last August, case rates have only climbed, according to psychiatrist Wahid Noorzad, who has led the Herat hospital’s psychiatric ward for more than a decade . . .

Researchers say the condition is often connected to experiences of extreme stress. Indeed, there is a small but detailed literature documenting cases in conflict zones, including one outbreak in Soviet Georgia in 1989 that affected hundreds with blurred vision, dizziness, and fainting. In another case in Kosovo in 1990, a mysterious illness spread suddenly among thousands of ethnic Albanian high school students. The New York Times documented an outbreak of mass fainting and dizziness in the Israeli-occupied West Bank in 1983, affecting 943 residents, most of whom were teenage girls. Investigators concluded that the wave of complaints were mostly psychosomatic — a case of mass psychogenic illness.

Mass psychogenic illness is ‘a collective stress response,’ [medical sociologist Robert E. Bartholomew] said, and ‘everyone is potentially susceptible because it’s based on a belief’ — in many cases, of a perceived threat.

Residents in all of these locations have had prolonged exposure to extreme anxiety, where political conflict or ethnic and religious tensions are a fact of life. Intense media coverage seemed to exacerbate outbreaks.

. . . ‘Stress triggers these outbreaks,’ [Bartholomew] said. ‘Particularly exposure to prolonged stress. The nerves and neurons that send messages to the brain get garbled and you get twitching and shaking.’

The result, he said, is a ‘trancelike and dopey’ state, which can come and go. ‘What’s interesting is, if the stress dissipates, just gradually over time, it tends to go away,’ he added. ‘But if it doesn’t, it keeps going on in a waxing and waning fashion and can go on for years.'” 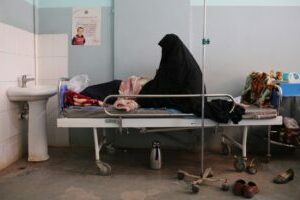