From Kindred Media: “We have a problem. We are raising too many [people] to be unempathic and oriented to their own ego enhancement, dominating others, treating others aggressively—doing great damage to the social fabric and even the future of the human species (Derber, 2013; Narvaez, 2014). But many of the characteristics of troublemakers in the USA are not considered ‘mental illness’ by the Diagnostic and Statistical Manual of Mental Disorders (DSM), though they would be by any indigenous psychology standard.

Indigenous psychology views things differently. Within indigenous communities, being bad for the community—harming another in any significant manner—is a sign of ‘illness.’ Whether robbery, assault, or murder, harming another is believed to be rooted in relational and emotional disconnection (Ross, 2006). Consequently, justice has to do with repairing relationships—restoring respectful and caring connection—toward self, others, community, landscape, and the unseen spiritual world. Healing circles are formed to determine the best course for repairing a particular situation.

. . . Typically in non-indigenous systems, offenders are systematically punished with separation from the community they have harmed. Instead of learning to reconnect respectfully to the community, they harden their disconnected ways in jails and prisons. Meanwhile, the harm to the community continues to ripple and reverberate, undermining feelings of trustful connection.

. . . The DSM grew out of an American society built on individualism, which emerged from historical shifts such as (a) disrupted European communities from the enclosures (privatization of common lands) occurring widely in the 16th and 17th centuries that forced people off the land, turning them into rootless migrants (Polanyi, 2001); and from (b) the rise of mercantilism and the ‘self-made man’ who necessarily divorced himself from community ties responsibility to make a buck (Hyde, 1983), an attitude that schooling also emphasized, including higher education, which shaped those creating the DSM. Thus, assessing disorders in individuals alone seemed logical to an increasingly relationally disconnected people.” 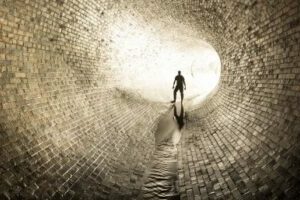