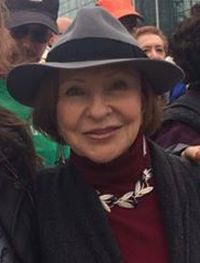 Vera Sharav, a professional law librarian turned public advocate for human rights, is the founder and president of the Alliance for Human Research Protection (AHRP) which serves as an information resource, a public interest watchdog, and a catalyst for public debate whose goal is to unlock the walls of secrecy in biomedical research and to bring accountability to that endeavor.

Ms. Sharav has developed a database to track ethical violations in research and failure to disclose drug hazards. Her advocacy efforts include: suspension of EPA pesticide experiment (CHEERS) on children (2005); federal investigations on the use of children in foster care in experimental AIDS drug and vaccine trials (2004); suspension of smallpox vaccine on children (2002); suspension of "violence prediction" experiment exposing 6-11 year old NYC boys to fenfluramine (1998); organized testimonies by victims of unethical research before the National Bioethics Advisory Committee (1997). These testimonies led to a prize-winning series in the Boston Globe, "Doing Harm: Research on the Mentally Ill" (1998), the shut down of 29 clinical trials at the National Institute of Mental Health (1999), culminating in the prize-winning book by Robert Whitaker, Mad in America (2001).

Mrs. Sharav served on the Children’s Workgroup of the National Human Research Advisory Committee (2001-2002); she has testified before national policy advisory panels including: the Institute of Medicine (against prisoner experiments (2005); against human pesticide experiments (2002); FDA hearings on antidepressants and the risk of suicide (2004 and 2006), the National Bioethics Advisory Committee (1997), military ethics forums and academic forums, and consumer advocacy forums (2006). Among her recent publications: Screening for Mental Illness: The Merger of Eugenics and the Drug Industry, Ethical Human Psychology and Psychiatry (2005); Conflicts of Interest in Biomedical Research Harm Children With and Without Disabilities,"Journal of Disability Policy Studies (2004); "The Impact of FDAMA on the recruitment of children for research," EHPP (2003); "Children in Clinical Research: A Conflict of Moral Values," American Journal of Bioethics (2003); The ethics of conducting psychosis-inducing experiments," Accountability in Research (1999).