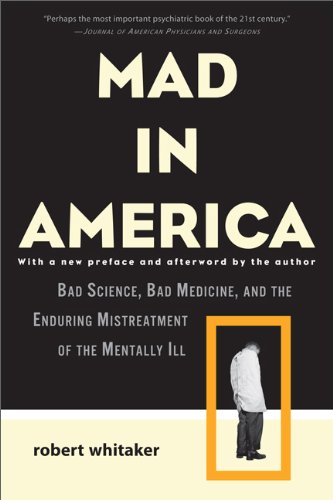 “The most important bit of mental health muckraking since Deutsch’s The Shame of the States was published in 1948.”

Mad in America is a history of the treatment of the severely mentally ill in the United States from colonial times until today. The book tells of the introduction of moral therapy in the early 1800 by the Quakers; the eugenic attitudes toward the mentally ill embraced by American society in the first half of the 20th century; and the various somatic therapies–the shock therapies and frontal lobotomy–embraced by psychiatry in the 1930s and 1940s. Finally, it tells of the poor outcomes for schizophrenia patients in the modern psychopharmacology era. (See chapters).

Conventional histories of psychiatry tell of how Thorazine and other antipsychotic medications “revolutionized” the care of the severely mentally ill. These drugs made it possible for people with schizophrenia to leave the asylum and live in the community–or so the story is told. Mad in America puts that story of progress under a historical and scientific microscope.

The history told in Mad in America will surprise many readers. In its review of the scientific literature, the book reveals that long-term outcome studies  of antipsychotics regularly showed that the drugs increased the likelihood that people diagnosed with schizophrenia would become chronically ill. The book also investigates the marketing of the new atypical antipsychotic medications in the 1990s, and uncovers the scientific fraud at the heart of that enterprise.

Also, see the timeline for antipsychotics.