Once second-generation antipsychotic drugs came on the market (which are known as “atypicals”), there were claims by psychiatric researchers that they would lead to much better outcomes for people diagnosed with schizophrenia. Unfortunately, government-funded studies (as opposed to research funded by the pharmaceutical companies that manufacture the drugs) have shown that patients are not doing any better than patients on the old drugs like Thorazine and Haldol. Moreover, the problem of early death associated with antipsychotic drugs has accelerated since the introduction of the atypicals.

A. Efficacy Studies (Not funded by pharmaceutical companies)

After a systematic review of the research literature, British investigators conclude that “there is no clear evidence that atypical antipsychotics are more effective or are better tolerated than conventional antipsychotics.”

Known as the CATIE study, researchers funded by the National Institute of Mental Health report that the new atypicals provide few, if any, benefits over the old drugs. Outcomes were poor for patients on both the new and old drugs.

Researchers with the U.S. Veterans Administration report that olanzapine (Zyprexa) does not provide any benefit over haloperidol in terms of compliance, symptoms, or overall quality of life.

4. Randomized Controlled Trial of the Effect on Quality of Life of Second-vs. First-Generation Antipsychotic Drugs in Schizophrenia.  Archives of General Psychiatry 63 (2006):1079-1087.

British investigators funded by the U.K. government report that, if anything, patients on the older drugs have a better quality-of-life than on the atypicals.

6. Factors Involved in Outcome and Recovery in Schizophrenia Patients Not on Antipsychotic Medications: A 15-Year Multifollowup-up Study. Journal of Nervous and Mental Disease, 195 (2007): 407-414. 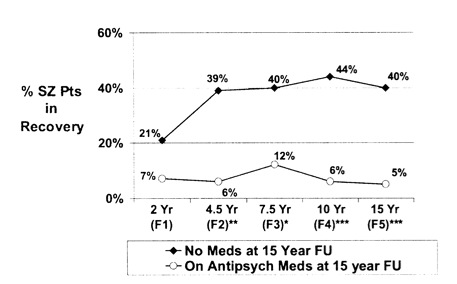 NIMH-funded researchers followed the long-term outcomes of schizophrenia patients diagnosed at two Chicago-area hospitals in the late 1980s, and they found that at the end of 15 years, 40% of the schizophrenia who had stopped taking antipsychotics were recovered, versus 5% of those who had stayed on the drugs. Long-term outcomes for patients with other psychotic disorders were also much better for those off the drugs than for those who stayed on the medications. (This is the first look at long-term outcomes since atypicals like risperdal and olanzapine became the recommended treatment.)

This is a small sampling of the many   studies that detail the problems induced by atypicals. In particular, there is growing literature on how Zyprexa and the other atypicals may induce metabolic dysfunction, and those studies are not available here. The section will be updated in the future.

8. Neurologic Side Effects in Neuroleptic-Naive Patients Treated with Haloperidol or Risperidone.Neurology 52 (1999):782-785.

In a study of 350 patients never before treated with neuroleptics, Physicians at McMaster University in Canada find that a low dose of risperidone caused Parkinsonism in 59 percent of the patients, compared to 52 percent of patients treated with haloperidol. The incidence of akathisia was also higher in the risperidone patients, leading the researchers to conclude that “risperidone may not be a useful alternative to typical antipsychotic drugs.

University of Pittsburgh researchers report that risperidone, when administered to neuroleptically naive patients, caused a disruption in eye movement still present four weeks after treatment was initiated, evidence of a neurological side effect lingering for a much longer time than it did in patients treated with haloperidol.

Patients treated with clozapine are at increased risk of dying from cardiovascular disease resulting from clozapine-induced obesity and metabolic disorders.

12.  The Influence of Chronic Exposure to Antipsychotic Medications on Brain Size Before and After Tissue Fixation.   Neuropsychopharmacology 30 (2005):1649-1661.

After 17 to 27 months of exposure to either haloperidol or olanzapine, the brains of macaque monkeys shrink 8-11% in weight and volume.

13. Effect of Chronic Exposure to Antipsychotic Medications on Cell Number in the Parietal Cortex on Macaque Monkeys.Neuropsychopharmacology (2006):1-8.

After 17 to 27 months of exposure to either haloperidol or olanzapine, macaque monkeys show a 14% decrease in glial cells in the brain.

This study concluded that “risk for death in schizophrenia was doubled on a background of enduring engagement in psychiatric care with increasing provision of community-based services and introduction of second-generation antipsychotics.”

The evidence for antipsychotics

Outcomes in the era of atypical antipsychotics