As politicians, media, and pro-gun and anti-gun lobbies all converge to agree on one thing, that those of us labeled mentally ill are fair game for dumping blame on and restricting of our civil liberties and constitutional rights, despite the fact that there is no rational evidence for such profiling – our community is responding with grief and anger.  The blatant rejection of our personhood is especially evident in the fact that our own voices are virtually absent from the media.

Reporters seem to think that only mental health professionals and “advocates for the mentally ill” have something to say.  This is to some extent a self-perpetuating cycle since they want voices that have already established themselves, but there’s a deeper rejection of our credibility to speak for ourselves, that replicates the discrimination that is at the core of the new policies.  And really, discrimination and profiling are the story that needs to be told – more than the question of whether mental health providers are going to be free to use their professional judgment, or whether the invasion of privacy is going to drive more of us away from “treatment.”

Out of my own need to get out in the streets to protest, I initiated an “event” inviting people everywhere (expected to be in the U.S. but international solidarity is welcome) to create their own local actions on Martin Luther King Day, Monday January 21, 2013.  Organizing is being done mainly through a Facebook event page, https://www.facebook.com/events/413065465440858/. 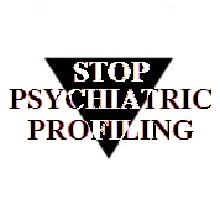 The Stop Psychiatric Profiling logo, using a black triangle, was created by members of the Occupy Psychiatry group.  The black triangle was a badge that the Nazis used in concentration camps to designate people as “asocial” and it included those labeled as mentally ill or mentally disabled, as well as homeless people, alcoholics, prostitutes, “work-shy” people, lesbians, draft dodgers and pacifists, according to Wikipedia.  As Diane Engster pointed out, the Nazis’ “euthanasia” of people with mental and physical disabilities started out with a national registry.

Below I have pasted the “why” of the event, which you are free to use in putting out a call for local activities.  Local activities can be as simple or elaborate as you wish, make your own sign and stand on a street corner.  Give out informational flyers.  Call local press to cover, take your own photos of the event and post them.  Wear a black triangle to other MLK Day events and tell people why.  Use your imagination for “creative maladjustment” to the (dis)order of the day.