There was a time when I, as a young woman, had not yet been a prostitute, a heroin addict, a homeless bum, and all that. I was, at that time, a literature student, at a famous school, and things were going well. But an eerie stampede of social workers and mental hospital stays were overshadowing it all. The tentacular reach of psychiatric drugs into the deepest recess of my being was performing a nasty assault on me from within the bloodstream. In order for my life not to be wasted, it became imperative that I get away. So I said goodbye, America. Goodbye, everybody that I used to know.

Often since that time, people have asked me, what could have been so terrible that I left such a prosperous-looking situation, and what made me take all these risks, and accept even being a sex slave rather than take my pills? After all, I always seemed so fine…

My experience of psychiatric hospital was brutal. I was a bystander as a man had his nose broken by security staff in order for him to be tied to a wheelchair and swiftly taken to a back room, injected with tranquillizers against his will, then receiving six month depo injections of major tranquillizers to make absolutely sure he wouldn’t play up again.

I knew that man might just as well have been me, if I had dared to complain about something at the hospital.

I was told that I would never work or write again, and that I should understand my life was one large failure. Heavily medicated and severely ill as a result of side effects, I watched the decline of my health from kidney failures to eye problems, hand tremors and a parkinson-like movement disorder that made me unable to eat with cutlery, to an inflated body size and swollen face. As a yount woman who had always enjoyed reasonably good looks, this came as a real shock, and I did not recognize myself as I spent each of 900 (nine hundred) days in a state of heavy tranquillization, in the absence of feelings or colour in life, from which my own inability to form or remember decisions, was the greatest obstacle to changing the situation.

Eventually, I got away, through a painful, moody, and atrociously sleep-deprived ten months of withdrawal amongst a chorus of loved ones telling me I was insane and should be put back on my meds. I gradually estranged myself from these loved ones. I became healthy again. Only some years later, I went to find some of these former loved ones again. It was a deeply saddening, confusing and angering experience for all involved.

Scenes replayed themselves before my eyes at night, scenes that I had seen occur in mental hospital, which I had been too tranquillized to feel shocked by, and as a result, I had neglected to turn my eyes away from.

In the fully-functioning mental state after my withdrawal, these scenes of violence returned to haunt me and their significance began to dawn on me. I heard the screams of an old man who was kept in a solitary, windowless, hospital room tied to his bed 24/7, the door of which was guarded by two security at all times, even though he was restrained by his arms and legs. He used to scream a lot, loudly and intensely, as if he was drowning or burning, and trying to attract attention. Every now and then he would receive electroshocks. Then he would be quiet. He had no family coming to see him, no way of meeting anyone in the hospital, he was always kept tied to his bed, and he screamed and screamed, and everybody heard.

I don’t think I was ever closer to killing myself than back then, and that was because I was getting the medications, rather than the other way around.

It took a long journey full of risks and unexpected twists and turns of fate. I got diverted from psychiatric regimens, via benzos to opiates and a full-blown heroin addiction, before I inadvertently slipped into prostitution and cocaine and crack nights on end with some seriously strange men. Lured down and imprisoned in the oily and sequinned world of the West End’s hidden brothels, I got to know the most eccentric characters, rockers, dreamers, comedians. Slipping through these nether worlds always thinking I would eventually find the way, pulling myself up by my own hair, I don’t quite know when, but one day I realised there was no longer a final destination, and I saw that I was happy and healthy, and creating, and in love, and there was basically nothing missing from my life.

I want to share this inner and outer journey with readers, through my book of short stories. 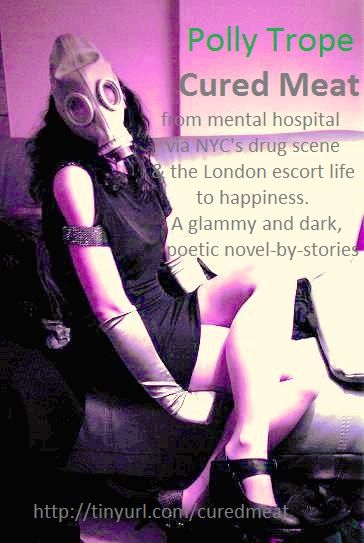 Editor’s note: Polly Trope is a pseudonym, for the author’s protection.