At the end of an hour long discussion with high school students at a Western Massachusetts high school, I was grasping quarter page slips of folded paper as it they were sheets of gold. On these slips of paper were questions the students asked me, as well as their answers to my questions, “What can you do to make yourself feel happier as an alternative to psychiatric drugs?” and “How do you get through hard times?” To some of them these answers may have been flippant, including things like Mrs. Rivera’s humor, Batman music, tumblr, and biting my nails. They also included love, eating, snuggling, my boyfriend, my girlfriend, green tea, good friends, drawing, playing guitar, a new book, flowers, fluffy things (pandas), writing, music, talking to friends, not isolating myself and sex novels. 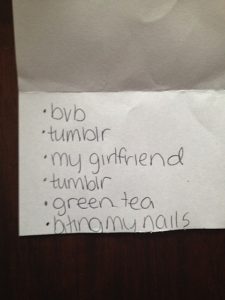 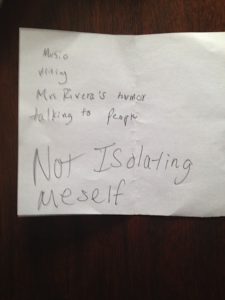 After my workshop on coming off psych drugs, a guidance counselor from Holyoke High School asked me if I’d speak at his weekly open support group about my experiences in the mental health system. After telling the group of teenagers a few things about my experiences, we gave them the option to write a secret question or comment on an anonymous slip of paper to be put in a box and read at random. The first question read was, “Have you ever tried committing suicide?” 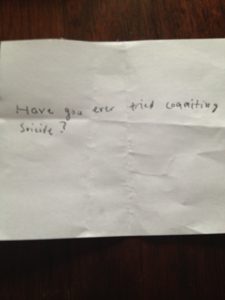 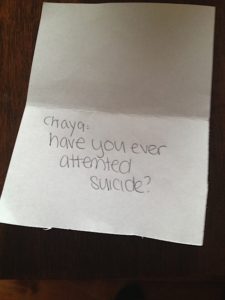 I said I had never tried to commit suicide but I threatened to once and was locked up and drugged against my will. I added, “I’ve thought about suicide a lot, though.” When prompted to share more about their experiences, one girl raised her hand and asked, “Will we get in trouble?” I laughed, “You won’t get in trouble with me.” I looked at the guidance counselor. “I don’t think you’ll get in trouble with him.” We smiled, and he confirmed that they would not. 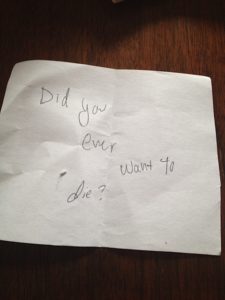 The second reader of these anonymous pieces of paper picked one out of the box, unfolded it and said, “Same question.” We all figured the first question paper had accidentally stayed in the box-but no, it was a different person’s question, this time phrased, “Have you ever attempted suicide?” The third question was, “Did you ever want to die?” At least half the students admitted to having attempted suicide numerous times. One smiling vivacious girl said the third time was a turning point for her. Her mom caught her and asked her loudly in Spanish, “Don’t you know people care about you?” It was then it hit her what she was doing, she said; it was a turning point and she hasn’t attempted suicide since. Most of them who had tried to kill themselves had either taken lots of pills or cut themselves in their attempts.

At this point I told them that doctors have a higher rate of suicidality and depression than the general population. I mentioned the article, “Could Your Doctor Be Mentally Ill or Suicidal?” recently posted on Mad In America. Quite a few of them laughed and one girl suggested a reverse diagnostic process, bringing in a checklist of symptoms to use to assess your doctors’ mental health.

In one hour we touched on many topics and I was exposed to an incredible amount of firsthand witnessing that was brand new for me. Only one person in the group said he takes psych drugs (anti-depressants). One boy said he used to take stimulants for an ADHD diagnosis but they made him sad, anxious and unable to sleep so he stopped taking them. At first he held them in his mouth when his mom gave him the pills and spit them out when she wasn’t looking. Eventually she stopped giving them to him. He was a freshman. It impressed me that a boy under 14 did this, knowing the drugs were causing him harm, knowing outright refusal might not be safe.

I was impressed with the awareness these kids had about how the drugs were affecting them and their friends and family members. One girl said she took anti-depressants for awhile but they made her feel like a zombie so she stopped. She said it made her have a fake smile on her face all the time.

I took the very queer friendly environment (which included a recently out trans person scheduled to share his story the following week) to mention that homosexuality used to be a “mental illness” in the DSM. They were horrified and looked lovingly and sympathetically at two of their friends, an adorable gay couple with arms around each other on the love seat. This led in to the topic of gender identity disorder and other obviously questionable diagnoses. In a very queer friendly high school with 5 out trans-gender people who are accepted, these diagnoses, which have come and gone, and the new diagnosable behaviors I mentioned, led one girl to ask, “So is it possible for them to tell you you have something and for them to be wrong?” I could see her comprehending the whole thing when I said, “Yes, of course-and these diagnoses are all created with large influence from pharmaceutical companies and insurance companies who are profiting from the drugs sales.” One girl said she wanted to take anti-depressants but was scared to. For one thing, her therapist said “No,” which, to my surprise was a common experience. A number of kids had asked for psych drugs but were turned down. Phew. The reason for her fear, though, was that her dad takes psych drugs and her mom thinks he’s crazy, “but he’s isn’t,” she said. “And I don’t want people to think I’m crazy.”

I validated hers and other fears of taking meds, letting them know they have never been tested on people their age and there are real dangers in taking a mind altering drug everyday while their brains are still developing. Most of them nodded, totally getting it. I was again impressed with their intelligence, and I added, “These drugs have only been tested in short trials and are primarily tested on healthy white men in their 20s.” A girl exclaimed, “That’s so racist!” We all nodded in agreement and added sexist, ageist and health discriminatory to the list.

The girl who wanted to take anti-depressants but was too scared asked, “I don’t mean this in a depressing way-I really don’t mean this in a depressing way- but what is the point of life? I don’t see what the point is if you don’t get to save anything you do since you die at the end anyway.” I told her I feel a sense of purpose in writing or speaking about things I feel I have a unique perspective on or am angry about so that I can hopefully make a difference in peoples’ lives even after I die. A girl who had been quiet most of the session said she finds meaning in writing and typing her thoughts with the hope that others will take action on her ideas.

Before we got into any of this, the group started with a check-in. The counselor asked for a topic, and a girl suggested, “What you love about unicorns,” which he modified to, “How you feel about unicorns.” About half of us said we like unicorns because they’re magical. The other half said they don’t like unicorns because they aren’t real. I believe in magic, I like magic, but I don’t like things that aren’t real, like psych labels, so perhaps that odd seeming check-in topic had some relevance after all.

Walking down the hallway after the session, the counselor and I ran in to another school social worker. The two of them casually chatted about how 2 new people had come out as trans-gender in the past week, both with the same new name. I thought of how different things are now than when I was a teenager, even though my high school was in New York City and very queer friendly.

On our way out, the counselor told me the psychiatrist at the school is very nice, but is a medication dispenser. She gives everyone drugs if they go to her. Having a psychiatrist in the school is another phenomenon that was foreign to me. Why would a school need a psychiatrist? He’s only referred one student to her, ever. He doesn’t know enough about psychiatric drugs to feel comfortable talking about them or making that decision for anyone, he said (but clearly he has a strong feeling about the topic and wants to learn more since he invited me to speak).

He then asked me a question I get a lot, that usually, quite frankly, makes me yawn: “So do you think medication can ever be helpful in the short term?” This question bores and annoys me, for it indicates how effective the overt and covert advertising from pharmaceutical companies is, despite how obviously dishonest it is. It causes intelligent thoughtful people to ask themselves whether something they would never consider otherwise, should be used as the first line of “treatment” for social problems.

I was surprised that I finally came up with a unique counter-question that didn’t bore me to ask.

I started by reflecting on my own experiences of taking Prozac for about a year as a teenager. I tried to open myself up to the question anew, pretend I had never thought about it before. I told him taking Prozac as a teen may have made me fit in more socially for a little while, but it didn’t help me learn how to be me in the world. It made me more extroverted but stole time from me that could have been better spent learning how to live with my introversion and get the most out of it. It made me a people pleaser but didn’t help strengthen me and it put a damper in my ability to learn about myself and the world in a genuine way. So I posed this question: “What about asking a gay person to try being straight for just a year?”

Note: Plans are in the works to film a similar workshop for interested teens and individually film some of them for the Open Paradigm Project. There is also at least one whose writing might be appearing on Mad In America, so stay tuned. If you know teens in the Western Massachusetts area who would like to be in a filmed workshop, please send them my way.