They tried to kill us off. They failed. Let’s eat. (Give or take a few minor details.) Pesach, or Passover, commemorates the biblical tale of the Jewish people fleeing from Egypt after a pattern of slavery and persecution designed to kill our culture. Within Reform Judaism especially, it is common practice to modernize the story with comparisons to current issues. You can bet there were many this year asking their community how Donald Trump or other modern leaders are similar to Pharaoh, maybe even imploring them to “let my people go” from slavery in mainstream prisons, where about half of inmates have been branded with a psychiatric diagnosis (some organizations use this statistic to prove how violent or how sick and in need of treatment we are; I call it discrimination).

As Neurodiversity Liaison of the grassroots advocacy group Southern California Against Forced Treatment, I helped in the development and execution of a Mad Passover Seder this year. To the delight and validation of our vision in creating this event, the Seder was attended by various flavors of Jewish people as well as non-Jews who identify as Mad, neurodivergent, survivors, or allies. I introduced myself as “only technically Jewish,” a product of pro-assimilation immigrants who prioritized doing things the “American” way. Some of us learned the Passover story, some learned about Mad Pride, and some learned about neurodiversity (and some all of the above).

A plate of five symbolic foods are traditionally served at Passover, such as bitter herbs symbolizing the harshness of the slavery the Jewish people endured in Egypt. Our first act of modernization was to add a sixth symbolic item to the Seder plate: a lock and key, to represent the violence and oppression of imprisonment in psychiatric institutions and the trauma of losing one’s bodily autonomy. On this night we would celebrate our freedom from both physical incarceration in psychiatric institutions and emotional incarceration in a pathology paradigm. On a last-minute whim, I also contributed one of those new fad stim cubes (AKA “fidget widget”), to represent the neurodivergent community (stimming is most closely associated with autism, anxiety, and kinetic cognitive style). In hindsight, I should have brought kinetic sand, to symbolize the desert traversed by the Jewish people in the Passover story. 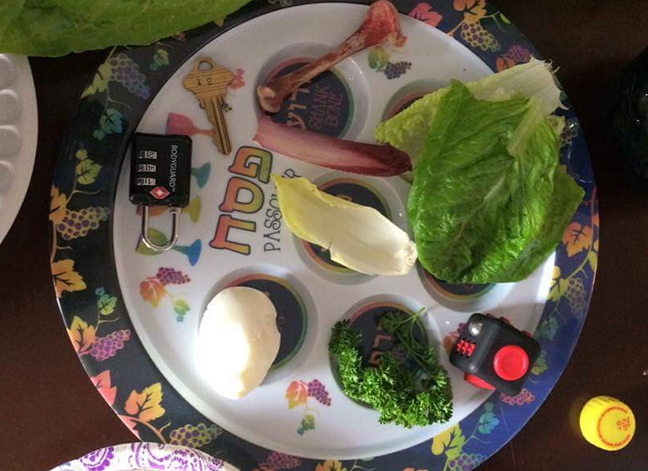 For our Haggadah, the reading material that guides the Seder activities, we added to the biblical story with a collection of essays, poems, and personal stories from Jewish Mad people, as well as a list of the 10 modern plagues: psychiatric incarceration, forced drugging, electroshock therapy, restraint, seclusion, coercive behavior therapies, outpatient commitment, the pathology paradigm, sanism, and societal coercion to recover. We asked ourselves why we eat bread or matza on other nights, but only matza on this night — a traditional Seder question with an established answer — then we asked ourselves why we are called Mad or ill or disordered on other nights, but only Mad on this night.

In developing the Mad Haggadah, I was asked to recommend writings on neurodiversity, to complement the pieces more focused on Mad identity. The first name that came to mind was Nick Walker, a neurodivergent Jewish scholar and author of several essays considered foundational to the neurodiversity movement, including “Throw Away the Master’s Tools” and “Neurodiversity: Some Basic Terms & Definitions.” While visiting his blog to print these essays, a third one caught my eye: “Neuroqueer: An Introduction.” Neuroqueering is a concept that refers to subverting or defying various societal norms, in ways that are similar to the queer community’s subversion and defiance of gender and sexuality. For example, I neuroqueer society by producing video critiques of neurodivergent movie characters, often citing that their portrayal embodies a normative external perception rather than internal experience, and is therefore bad acting. Neuroqueer can also refer to subversion or defiance that is directly related to literally being queer in terms of gender and sexuality, in addition to neurodivergent. I neuroqueer society by existing openly as a transgender Autistic person whose subjective internal experience of gender is directly informed by being Autistic.

As a launching point for what became an hour-long discussion, we looked to the neuroqueer introduction essay for its 9 examples of what neuroqueer means, which I will interpret into plain language for the sake of a smooth read:

1. Understanding oneself as neurodivergent (or Mad) the same way Queer Theory understands being queer. We don’t need to be “born this way” but we also don’t need a doctor’s permission for our identity. We are members of minority groups with our own natural inclinations, which lead to having our own cultures.

2. Being both neurodivergent and queer, with some awareness of how the two interact. Queer people, especially asexual and transgender people, are no strangers to the harm inherent in being medically pathologized, nor to how much more liberating it is to free one’s identity as simply a way of being. Though most of the community has now forgotten, homosexuality was once a mental disorder too.

3. Embodying neurodivergence/Madness in ways that queer other identities. Identities such as being Jewish. I personally queered my Jewishness by reclaiming it in the face of a culture that infected my bio-family with internalized assimilationism.

4. Intentionally altering one’s own thoughts to diverge further from the norm. Recognizing that there’s nothing wrong with being neurodivergent/Mad is one thing; seeing it as good or preferable is even more radical.

5. Undoing conformist conditioning to express oneself authentically as a neurodivergent/Mad person. This was the understated power of adding a stim toy to our Seder plate. It spread a semi-conscious attraction throughout the room and encouraged people to re-discover the kinds of stimulation their bodies naturally want.

6. Adopting “neuroqueer” as an identity label because of these practices.

7. Making art that centers the internal experiences of neurodivergent/Mad people. While the closest thing to art we made on the spot was a verbal discussion, the Haggadah supplement included Mad people’s essays, memoirs, and poetry.

8. Critically responding to media portrayals of neurodivergent/Mad people or characters. At one point we reflected that the character of Moses, if he were alive today, would probably be considered Mad, and in this cultural climate, his contributions to the world would have been suppressed by locking him away or sedating him with medication.

9. Advocating for these practices to be accepted in society. By meeting as an advocacy group but for a social and cultural event, we reaffirmed our sense of community, our support for one another in the many battles ahead.

To bring the conversation full circle, we then added a 10th item to the list, explicitly a discussion question: “How do we as Jewish people neuroqueer our non-Jewish society, our own Jewish communities, and ourselves?”

Jewish history is a repetitious tale of refusing to conform. We are deviants in every nation (yes, even Israel), pressured to assimilate, to give up our cultural identity and conform to the social standards of the majority. Had we given in to this pressure, Judaism and Jewish culture would have ceased to exist. We did not. We have been defiant and we live on. Though there are Reform Jews who marry outside their community, they continue to pass the culture on to their children. My bio-family, where assimilation was for its own sake, is in the minority. While in antisemitic language being Jewish is not considered a medical condition to heal from as individuals, it is very much considered a blight on society whose erasure would supposedly help everyone.

Psychiatric “recovery” is a code word for conformity, for assimilation. People who are either born deviant or who later develop differently within a conformist society need to be beaten, broken, and reset so they can get back in line. Perhaps the most blatant example lies in the field of Autistic Conversion Therapy, obfuscated by psychiatrists as “Applied Behavior Analysis.” This field celebrates children becoming “recovered from autism” based on the measurement that they are now “indistinguishable from peers.” In other words, compliance training has taught them to be convincing actors, cultural outsiders successfully assimilated. If not — if someone is so far-gone in their “illness” that they cannot be trained to conform for their own good — then they need to be locked up, “out of sight, out of mind” to spare their ugliness from society.

As a Mad, neurodivergent, disabled, queer Jew, I completely reject the idea that conformity and assimilation is the “solution” to the Jewish problem or to the problem of mental illness, because I reject the assumption that either is a problem to begin with. As a psychiatric survivor, saying this places me on a radical sociological frontier, but as a Jew it is not a new thought. Regardless of how pure we are in our religious observance, from Orthodox Jews who follow the Torah and Talmud unerringly all the way to Jewish atheists, we’ve maintained our identity as a culture.

For millennia, Jewish people have neuroqueered the world simply by sticking together, refusing to give up our cultural practices, continuing to exist as Jewish people. Now is the time for Mad and neurodivergent people to do the same. They tried to kill us off. They failed. Let’s eat.