From The Atlantic: The new Netflix film To the Bone, which tells the story of a woman’s struggle with anorexia, reflects our culture’s morbid fascination and obsession with emaciated female bodies. Critiques of the film speak to how difficult it is to responsibly portray anorexia without feeding this fascination or contributing to cultural messages that create eating disorders.

“The author Hilary Mantel, in a 2004 essay for The Guardian, considered how the virtue associated with fasting fits into a broader cultural sympathy for anorexia, compared with the widespread condemnation of binge eaters. ‘Though the temporarily thin find it easy to preach against the fat, we are much more interested in anorexia than in obesity,’ she writes. ‘We all understand self-indulgence, but are afraid that self-denial might be beyond us.’ Films like To the Bone, however well-intentioned, feed this fascination. Ellen does so many sit-ups per day that she has bruises on her spine. In one scene, she resists a bite of her favorite candy bar with extraordinary, painful self-resolve.

It isn’t just anorexics and spiritual leaders who preach the virtues of self-control. The most popular mantras propagated by trainers and fitness bloggers on Instagram (‘sweat is fat crying’) are often indistinguishable from the slogans on pro-ana websites. We understand, as cultural consumers, that anorexia is a disease, but we also, in some ways, admire it, and all the abstemiousness that it implies. The on-hiatus NBC show The Biggest Loser, in which obese contestants competed to see who can shed the most excess weight, used to push the scripture of discipline and physical will to several million viewers a week. The author Roxane Gay once described ‘the spectacle of the contestants pushing themselves in inhuman ways—crying and sweating and vomiting—visibly purging their bodies of weakness.'” 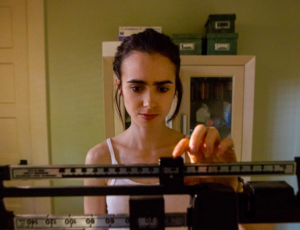 When Treatment Makes You Sick: The Eating Disorder Clinic