In this piece for The Guardian, Jay Watts explores the social and societal factors that often lead to self-harm and explains how psychiatric labeling can exacerbate self-harm.

“Self-harm is also often the result of a clash between an ideal image and one’s self-image. For example, if a teenager feels that they have to do brilliantly at school to get into a top university for Mum and Dad, not achieving that 10th A* can feel like a shattering blow crystallising long-held beliefs that they are not good enough. Early caregiving has a crucial function in ensuring kids develop a good-enough self-image that can withstand the bumps and bruises of life. However, the likelihood that an acceptable sense of self will collapse is also a function of the ideals of society at any given time, hence the current epidemic of self-harm.

A neoliberal culture that pits kids against one another at an ever earlier age, digital culture, and a hypersexualised environment that privileges certain body-ideals all serve to increase the likelihood of a catastrophic gulf between the ideal and actual self-image. Discrimination is also a huge trigger behind the startling rates of self-harm in LGBT communities. Societal hatred of difference gets drip fed into individuals whatever their conscious beliefs, and enacted on their own body.” 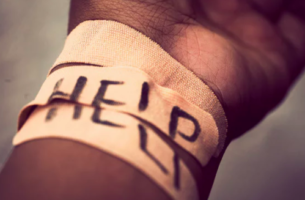