Re: Complaint re RANZCP Press Release.

I refer to the press release by RANZCP responding to criticism of antidepressant drugs voiced by Prof. Peter Gotzsche of the Danish Cochrane Centre at recent seminars in Sydney and in New Zealand (06.03.18: RANZCP deeply concerned over stigmatising reporting of mental health treatments. Note that this has since been deleted). [MIA note: press release is provided after this letter]

There were five professional speakers at the Sydney conference and three who talked on their own experience of psychiatry. Four of us spoke to Powerpoint displays while, as is his wont, Prof. Gotzsche spoke extemporarily, relying on his unrivalled, encyclopaedic knowledge of the field of psychotropic drugs. While I did not go to NZ and therefore did not hear Prof. Mulder’s presentation, I am satisfied that each speaker I heard presented his or her material in a form and style appropriate to a scientific meeting. The standard of presentations was high and discussion was animated. In formulating its press release, I note that the College has not asked for any further details beyond those reported in the daily press in NZ (here and here).

I am very familiar with published work by Prof. Gotzsche and Mr Robert Whitaker, and with the current and historical claims made by mainstream psychiatry with respect to its forms of treatment (e.g. 08.03.18). I do not propose to enter the debate on the rights and wrongs of prescribing antidepressants to an ever-increasing proportion of the adult population (9.8% in Australia, 13% in NZ) even as the suicide rates trend higher because that is an empirical matter which will be settled elsewhere. My concern is with the content and manner of the RANZCP press release. Acting per Principle 10.5, RANZCP Code of Ethics, I will deal with each point in turn.

Response 1a).
Figures presented by a number of speakers indicated in clearest terms that claims made by manufacturers of antidepressant and antipsychotic medication are unreliable, and we psychiatrists need to take the hardest of looks at these drugs and their usage. That is our inviolable duty as practitioners; the allegation that this was in any way irresponsible is grossly disrespectful, indeed, insulting, of the ethics and standards of the presenters. Specifically, at this point, the press release breaches Principle 10.4 of the RANZCP Code of Ethics (When opinions differ, psychiatrists shall express their views in a respectful manner that avoids self-promotion or denigration of others). Having spoken at the conference, I object most strongly to the implication that I or any of the other speakers acted in an irresponsible manner. For the record, I stated in my talk that nobody should ever cease psychiatric drugs abruptly as it will cause a severe withdrawal state. That was echoed by different speakers half a dozen times during the day.

Response 1b).
The claim in your press statement that questioning the efficacy and safety of these drugs somehow “stigmatises” the long-suffering “consumer” is illogical.  At no point in the conference I attended was there the slightest hint of any attempt to stigmatise people living with mental disorder, and I am certain that was true in NZ, too. To the contrary: everything said and done was directed at improving their lives, including the apparently radical suggestion that we psychiatrists need to examine whether sufferers’ lives are improved by ever-increasing doses of ever-larger numbers of ever-more powerful psychoactive chemicals.

It is the inviolable duty of all psychiatrists to question what they do, in every respect, at all times, and for each and every patient. This appears to be an attempt to manipulate sentiment in order to block public examination of psychiatric policies. I allege that this is unethical, specifically in terms of Principles Ten and Eleven of the Code of Ethics.

2. “The RANZCP considers the publication of news items that dispute this to be inaccurate and damaging.”

Response 2.
This could be seen as an attempt to suppress a long-overdue debate on the place of psychotropic drugs in modern society. In Australia in 1991, 1% of the population took antidepressant drugs. That figure is now nearly 10%. At the same time, the suicide rate in this country has recently reached a 25yr peak while the numbers of people granted Disability Support Pensions or superannuation for depression and other psychiatric reasons continues to rise remorselessly. It is the right of any citizen to question professional actions and opinions. Any attempt by the RANZCP to intimidate the press into following its own line is unacceptable.

3. “The RANZCP is always very concerned to see news articles, such as the one in The Press, that criticise scientifically proven treatments for serious mental illness.”

Response 3.
The RANZCP seems to have forgotten psychiatry’s atrocious history, how each generation trumpets some ghastly procedure or another as the latest “scientifically proven treatment for serious mental illness.” If, for example, people had not taken a stand, we could still be in the era of psychiatrists performing transorbital leucotomies in their rooms. The move to stop this abomination did not come from psychiatrists, it came from the general public which was horrified by reports in the daily press.

4. “The RANZCP would seek to caution all forms of media against the publication of news items that might negatively impact upon people experiencing mental illness.”

Response 4.
It is not appropriate for the RANZCP to tell the media its job. It leaves our profession open to the charge of manipulating the distress of the mentally-disturbed to force the press to self-censor, in order to protect the status of psychiatry at the expense of our patients. As the lay speakers made absolutely clear at the conference, all too often it is psychiatry itself that “negatively impact(s) upon people experiencing mental illness.”

5. “Psychiatrists are highly trained medical professionals with expertise in managing both physical and mental health….”

Response 5:
This claim is false. Most psychiatrists these days won’t even look at a patient’s physical state and, in the main, would be ill-equipped to deal with it. Patients gain massive amounts of weight while taking psychotropic drugs but this doesn’t seem to concern anybody.

6. “The prescription of antidepressant or antipsychotic medications is something that a psychiatrist only ever does in partnership with the patient and after due consideration of the risks and benefits.”

Response 6.
I submit that this statement is manifestly false and that it was impossible for the College not to have known that it was false. Every day in Australia and in New Zealand, thousands of people are forcibly detained in a hundred or more institutions, stripped of their most basic human rights (and very often of their clothing) and physically compelled to take drugs, often by injection or even by squirting them down the sufferer’s throat, with no sense of “partnership” or “due consideration” of any risks or benefits. This extends to people on community treatment orders who live in the certain knowledge that if they dare to question their enforced drugging, they can be dragged back into hospital by police and injected under duress. Anybody who objects is most likely to get more, not less, of the drugs. Moreover, involuntary patients are regularly subjected to ECT even though they and their relatives don’t want it. Merely declining triggers the section of the Act relating to “unreasonable refusal of treatment,” even though nobody has ever defined “reasonable refusal.”

As noted, 9.8% of the Australian adult population now takes antidepressants: practically none of those 1.7million people was told antidepressants meet all current definitions of “addictive drugs,” nor were they given adequate warning of the many dangerous or disabling side effects of psychiatric drugs, such as metabolic syndrome, hypomania, sexual dysfunction, akathisia, neuroleptic malignant syndrome and increases in suicidal and/or homicidal ideas and/or impulses. My experience is that almost all people who are given this information will refuse the drugs.

In particular, they are almost never warned of the dangers of abrupt withdrawal of psychiatric drugs. Invariably, psychiatrists dismiss withdrawal effects as “a recurrence of the illness” and prescribe more drugs in larger doses.

This particular claim is the gravest aspect of the entire press release. By blatantly misleading the public on such an important point, it breaches every conceivable concept of professional ethics and will bring the profession into disrepute.

7. “The RANZCP will not be making further comment at this time.”

Response 7.
What appears to be an attempt to “close down” the public debate in the last line is arguably a serious breach the duty of medical professionals to hold themselves to public account for their actions, particularly when the public pays our salaries.

In summary, I reiterate that I put a great deal of care and effort into my presentation and I know the other speakers did the same. I absolutely and categorically deny that my work or theirs was “irresponsible… inaccurate and damaging.” Instead, I contend that the press release by the RANZCP was all of those things.

I submit that a fair-minded reader of this press release could reasonably conclude that it is:

1. egregiously insulting to professionals, and/or
2. manipulative, and/or
3. misleading when not frankly false, and/or
4. is likely to bring the reputation of psychiatry into disrepute.

I submit that it breaches Principles Six, Ten and Eleven of the Code of Ethics. In your responses, please address each of the seven points listed above in terms of the four conclusions. 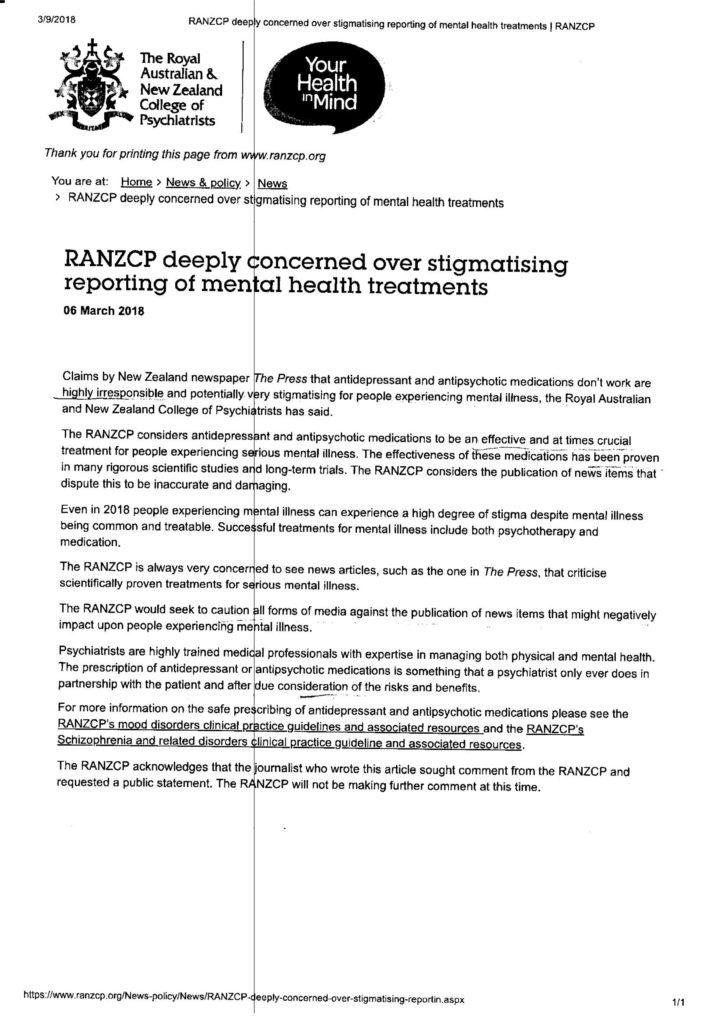 More on this story:

Letter to the Royal Australian and New Zealand College of Psychiatrists

Formal Complaint to the UK Royal College of Psychiatrists

The Story of a Professional Delusion: Do Psychiatrists Believe Their Own Words?

Letter to the Royal Australian and New Zealand College of Psychiatrists