In this piece for Aeon, Edward Thornton chronicles the friendship and collaboration between the radical psychoanalyst Félix Guattari and the postmodern philosopher Gilles Deleuze.

“‘How could two such different men, with such distinct sensibilities and styles, pursue their intellectual agenda together for more than 20 years?’ asked Francois Dosse in his 2007 double biography. The answer to this question – and the secret to their alliance – was their mutual distrust of identity. Deleuze and Guattari were both resolutely anti-individualist: whether in the realm of politics, psychotherapy or philosophy, they strived to show that the individual was a deception, summoned up to obscure the nature of reality.

From their first collaboration, the pair would go on to develop various strands of anti-identitarian thinking, imagining a future in which the individual no longer reigns supreme. This ethos was evident not just in whatthey said, but how they said it – writing, editing and rewriting in a strange and unusually symbiotic dialogue. The duo worked in a fashion that presumed ‘a community of being, of thinking, and of reacting to the world,’ as Dosse put it. Instead of pushing for historically subjugated identities to be reclaimed, Deleuze and Guattari tried to dissolve the distinctions that defined and delimited the individual subject itself. The result was a progressive, Marxist-inspired, anti-capitalist politics of joy – one that sits uncomfortably with some forms of identity politics prevalent today.” 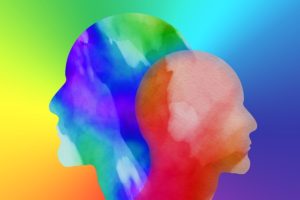