“This statement is an official statement of the specific signatories listed below, and does not represent the position of the American Psychological Association (APA) or any of its other Divisions or subunits not listed.

As psychology groups committed to social justice, we find it necessary to comment on the ongoing and ever-changing policies that serve to dehumanize immigrants, asylum-seekers, and their families in the U.S. Although the June 20, 2018 executive order halts the unconscionable practice of separating immigrant children from their parents, it is critical that the current Administration take the necessary steps to expeditiously reunite those families that have already suffered separation, and acknowledge and respond to the pain and suffering these cruel immigration practices have created on families and communities.

At the core, we strongly stand against any policy that criminalizes parents fleeing poverty, violence, and political persecution in search of a safe and better life for their children and that is more frequently resulting in immoral ‘zero-tolerance’ practices.

For the sake of clarity and stability, we contend that the existing inhumane practices be replaced by more permanent laws that safeguard the well-being of immigrant and asylum-seeking families. In essence our position as mental health professionals and psychologists reflects the well-established fact that current immigration policies and practices (including ‘warehousing’ immigrants) are likely to result in irreparable and lifelong physical and psychological harm to both parents and children. Before the executive order, more than 2300 children were separated from their parents. Alarmingly, some 1400 undocumented minors are allegedly lost in the system.

Our position is based, in part, on the fact that the practices accompanying the zero-tolerance policy goes contrary to the moral, humane, and democratic principles and values upon which this country was founded. It is also supported by the fact that U.S. asylum and immigration have historically operated as part of a cluster of constitutional and international laws that emphasize the value of all families.

Pragmatically, we also acknowledge and accept the fact that the indefensible immigration practice of separating children from their parents appears to be driven by political expediency. The zero-tolerance policy and corresponding practices should not be used as political leverage, with children and families as hostages and/or pawns, to force passage of its unpopular immigration agenda. Suffice it to say that it is not an option to use the well-being of children and families as a political bargaining chip. Such action should not be permitted in a democratic society.

Given our interest, dedication, and commitment to ensuring the health and well-being of immigrant and asylum-seeking children and families, we specifically bring attention to selective physical and psychological health concerns, issues, and problems associated with parent-child separations. These concerns emerge from research findings. We provide this information to increase awareness of the impact of past and present immigration practices as we chart out ways to respond to the health and well-being of immigrant families in the future.

First and ​foremost, we must remember that immigrant children are still children. Protections for children in law or by the courts exist because children are uniquely vulnerable and are at risk for trauma, trafficking, and violence. Immigrant and refugee children are particularly vulnerable to harm by virtue of decreased safety and stability coupled with fewer social, emotional, and physical resources.

Regardless of their immigration​ status, children deserve compassion and protection from authorities who possess real or perceived power. Practices such as separating children from their parents can serve to erode the child’s fundamental sense of security, safety, and stability and can be experienced as a form of psychological trauma. The deleterious effect of separation is so significant that the American Association of Pediatrics has designated it as a form of child abuse.

Children​ as young as 18 months of age have been ripped away from their parents. Family separation at such young ages disrupts parent-child attachment bonds, which are the most fundamental of all emotional bonds necessary for optimal psychological development.

Given that thousands of children have not been unified with their families, it is critical that they be under the care of staff and care takers who are prepared to effectively work with children of ​diverse ages, cultures, and spoken languages. Such children are also quite likely contending with psychological issues due to traumatic events from which they are fleeing in their home countries. Additionally, according to the American Association of Pediatrics, studies of detained immigrants have shown that children and parents may suffer negative physical and emotional symptoms from detention, including anxiety, depression and posttraumatic stress disorder (PTSD). Conditions in U.S. detention facilities that contribute to these symptoms include forcing children to sleep on cement floors and use open toilets. Constant light exposure, insufficient food and water, lack of bathing facilities, and extremely cold temperatures also contribute to subsequent PTSD. In short, detention centers are not appropriate places for children or adults.

Similarly, placing child​ren into the foster care system can be quite emotionally, socially, and psychologically detrimental for many of the separated children. The detrimental effects would likely manifest themselves among separated youth who may find themselves trapped in the foster care system for an extended period of time. Data suggest a significant number of foster kids who grew up in the system often do not receive a high school diploma or GED, according to the Children’s Law Center of California, while approximately a third of kids exhibit mental health disorders including PTSD. More than a quarter will be incarcerated in the first two years after leaving the system, and a third will need public assistance.

Parents also suffe​r when they are separated from their children, and the separation causes a disruption in the family’s cohesion and functioning.

We write this statement to urge support for the abolition of all polices and practices that harm immigrants, asylum-seekers, and families. We understand we must assume our share of the responsibility of creating more just policies and practices as we move forward. It is our obligation as members of this society to encourage Congress and the Courts to act; lawsuits, protests, and the ballot box can and will make a difference. We must continue to reject the Administration’s claim that it has unfettered power to regulate the border (Collins, Mayeri, & Motomura, 2018). While it may take time to undo the havoc that the Administration has created on the border, the harm done to separated families will take far, far longer to repair. To this end:

We urge elected officials, the Courts, and others to:

Develop a plan and implementation for expeditious reunification of families affected by the ‘zero tolerance’ policy.

Provide reparations in the form of rehabilitation (e.g., psychological and social services) for the thousands of family members separated by the ‘zero tolerance’ policy, in keeping with the United Nations’ basic principles and guidelines for reparations. The separation and warehousing of children and families are human rights violations. Consistent with the United Nations and other human rights groups, we understand that reparations are meant to recognize and address the harms suffered during such violations.

Advocacy to promote the safety, well-being, and rights of asylum-seekers and immigrants.

English: Mixed Status Immigrant Families in Times of Fear and Uncertainty: A Toolkit for Parents

Organizations Working on Behalf of Asylum-Seekers and Immigrants

Roth, B. J., Crea, T. M., Jani, J., & Underwood, D. (2018). Detached and afraid: US immigration policy and the practice of forcibly separating parents and young children at the border.Working Paper.

*Please email [email protected] to request a list of psychologists with expertise related to immigration, detainees, and asylum-seekers. These are individuals who can speak more directly to the issues addressed in the statemen 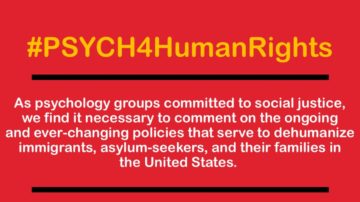