Dr. Baselga, a giant in cancer research whose work led to the discovery of the lifesaving drug Herceptin, resigned on Thursday after The New York Times and ProPublica reported that he had repeatedly failed to properly disclose millions in industry payments.

Decades of research and real-world examples have shown that such entanglements can distort the practice of medicine in ways big and small. Even little gifts have been found to influence doctors’ prescribing habits and their perceptions of a given company’s products. Larger payments have been shown to affect the design of clinical trials and the reporting of trial results, among other things. And such financial entanglements have proved devastating to individual patients — and to society at large. The opioid epidemic, to take one recent example, was partly spread by doctors who were persuaded to ignore warning bells and prescribe these drugs liberally by companies that showered them with gifts and consulting fees.

Financial conflicts are hardly confined to Sloan Kettering. A 2015 study in The BMJ found that a “substantial number” of academic leaders hold directorships that pay as much as or more than their clinical salaries. According to other surveys, nearly 70 percent of oncologists who speak at national meetings, nearly 70 percent of psychiatrists on the task force that ultimately decides what treatments should be recommended for what mental illnesses, and a significant number of doctors on Food and Drug Administration advisory committees have financial ties to the drug and medical device industries. As bioethicists have warned and as journal publishers have long acknowledged, not all of them report those ties when and where they are supposed to.

Medical journals and professional organizations have also told The Times that they are looking for ways to streamline the disclosure process for doctors and to better track those disclosures themselves. Those are good first steps, but if institutions charged with curing the sick are serious about finally stopping the corruption of medicine by money, they’ll need to do much more than that.” 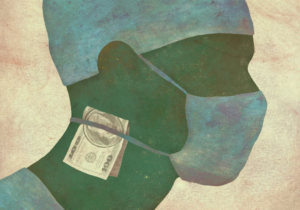