From The New York Times: “Disclosure is better than no disclosure, but it does not eliminate the conflict of interest. It’s simply a way of saying caveat emptor, and leaving it to readers to decide whether the research was biased. But most people — even doctors and science reporters — aren’t really equipped to make those judgments, particularly when data are suppressed.

I would suggest two reforms. First, researchers at academic medical centers should not accept any payments other than research support from drug companies, and that support should have no strings attached — no control over the design, interpretation and publication of trial results. We should go back to arm’s length grants.

Second, doctors should not accept gifts from drug companies, even small ones, and they should pay for their own meetings and continuing education, as is standard in other professions. They can afford it.

In the meantime, those of us who read these studies should remain skeptical about them until several different trials reach the same result.

The indignation about Dr. Baselga is justified. But the fact that other physicians disclose their myriad conflicts of interest does not solve the underlying problem. Collaboration with industry can lead to important scientific contributions, but we should not let drug companies buy the hearts and minds of researchers. The cost of this is high, and not just in drug prices. It means both doctors and patients believe prescription drugs are better and safer than they really are.” 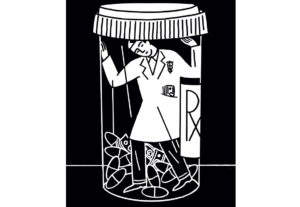