From the BBC: “‘A lot of people thought it was a ridiculous idea,’ [Zimbabwean psychiatrist Dixon Chibanda] says. ‘My colleagues told me, “This is nonsense.”‘

Lacking any other option, though, Chibanda began training the grandmothers as best he could. At first, he tried to adhere to the medical terminology developed in the West, using words like ‘depression’ and ‘suicidal ideation.’ But the grandmothers told him this wouldn’t work. In order to reach people, they insisted, they needed to communicate through culturally rooted concepts that people can identify with. They needed, in other words, to speak the language of their patients. So in addition to the formal training the received, they worked together to incorporate Shona concepts of opening up the mind, and uplifting and strengthening the spirit. […]

Having come from the same communities as their patients, Chinhoyi and the other grandmothers have often lived through the same social traumas. Yet Chibanda and his colleagues have been shocked to find that the grandmothers themselves present surprisingly low rates of post-traumatic stress disorder and other common mental health ailments. ‘What we see in them is this amazing resilience in the face of adversity,’ he says.

Nor do the grandmothers seem to get burnt out despite counselling people on the brink of crisis day after day. ‘We’re exploring why this is, but what seems to be emerging is this concept of altruism, in which the grandmothers really feel that they get something out of actually making a difference in the lives of others,’ Chibanda says. ‘It gives them a lot of great benefits, too.’ […]

In 2016, Chibanda – collaborating with colleagues from Zimbabwe and the UK – published the results of a randomised control trial of the programme’s efficacy in the Journal of the American Medical Association. The researchers split 600 people with symptoms of depression into two groups. They found that after six months, the group that had seen the grandmothers had significantly lower symptoms of depression compared to the group that underwent conventional treatment. […]

The programme has also expanded to several countries, and in doing so, Chibanda and his colleagues have found not only that it translates well across cultures but also that grandmothers aren’t the only ones capable of giving effective counseling. In Malawi, the Friendship Bench uses elderly counsellors of both genders, while Zanzibar uses younger men and women. New York City’s counsellors are the most diverse, including individuals of all ages and races, some of whom come from the LGBTQ community. ‘We cover all the bases,’ says Takeesha White, executive director of the Office of Strategic Planning and Communications at the NYC Department of Health’s Center for Health Equity. ‘New York City’s population is very broad.’

Many of the New York counsellors have successfully overcome addictions and other life challenges themselves. ‘We’re committed to having folks with lived experiences, who can speak the language of recovery and of dealing with addiction,’ White says. ‘Before you know it, you’re not on a bench, you’re just inside of a warm conversation with someone who cares and understands.'” 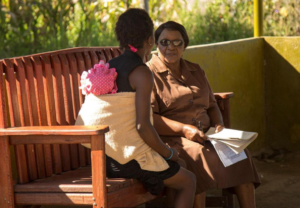