From YES! Magazine: “As Joe Clemons was growing up, he used to listen to family members share stories. Some stories were imaginative and rousing, while others were more monotonous. Nevertheless, hearing accounts of how his elders experienced life before him was a form of bonding and had a large part in shaping his selfhood—especially the stories his father told him about coming of age as a Black man at the height of the civil rights movement.

‘A lot of those stories are tied to my identity,’ Clemons said. Though his father wasn’t particularly fiery in his delivery, his career as a preacher meant oral storytelling was a natural element of his parenting. Clemons now attributes his own career as a poet and spoken word artist, in part, to those moments. ‘Any story he told was to give you better context to understand the world you’re in, and that’s what I try to do when I’m writing,’ he said.

Exchanging stories with family members is not an inconsequential pastime. Research published in Emory University’s Journal of Family Life shows that a people’s knowledge of their family history correlates to higher self-esteem, lower anxiety, stronger familial cohesion, and a better sense of control over one’s life. Furthermore, internalized family narratives can influence one’s sense of individuality.

James Allen, an assistant professor of psychology at Trent University in Peterborough, Ontario, has studied narrative identity theory, the notion that an individual’s stories about one’s life should be regarded as an essential element of one’s personality.

‘There’s lots of evidence that the stories we hear growing up in our families and in our cultures play a major role in how we develop a sense of autobiographical memory, which then leads to a sense of identity,’ Allen said.” 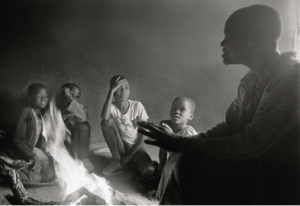