From The Texas Tribune: “Around 1,800 children in the Valley had a parent deported by Immigration and Customs Enforcement in 2017, leading to what the study’s authors say is increased levels of ‘toxic stress’ in the community.

‘Their brains can’t stop thinking, “I’m in danger,”‘ said Teresa Brown, founder and director of the Attachment and Trauma Center of Houston. ‘They live with this helpless, terrorized feeling of “everyone could possibly be the person who comes and causes my greatest fear to happen again.”‘

An Austin-based immigrant advocacy group, American Gateways, said a U.S.-born toddler lost several fingers in a bike chain in August and her undocumented parents needed to rush the 18-month-old to a surgeon in San Antonio — a trip that required passing through one of the three Border Patrol checkpoints in the Valley.

Griselda Barrera, director of the San Antonio office for American Gateways, said the group worked with Border Patrol agents in Harlingen to quickly get the girl and her mother through the Sarita checkpoint.

CBP agents followed the ambulance from Harlingen to San Antonio, Barrera said, then remained outside the girl’s hospital room and detained the mother after the child was discharged. Through an agreement with ICE, officials allowed the mother to return to the Valley, be fingerprinted and then quickly released.

Surgeons were unable to re-attach the girl’s fingers, and Barrera said the mother is now in removal proceedings, being represented by a lawyer secured by American Gateways.” 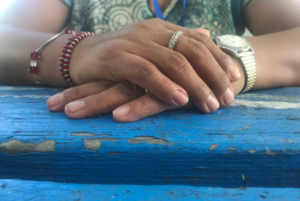