From ACEs Too High News: “As a community organization and non-profit, RYSE is beholden to and bound by systems that allocate and deploy resources contingent on our ability to ‘comply’ with too-often dehumanizing interventions and assumptions about young people of color’s capacities, abilities, and needs, treating them largely, and sometimes solely, as risk, problem, or disease. Overemphasis on ‘metrics of compliance,’ such as self-efficacy, civic engagement, readiness, changes in behavior, attitude, even resilience, perpetuate dehumanization and ignore those of survival, fortitude, and resistance – all of which are reasonable and normal responses to structural/historical subjugation, discrimination, and state-sanctioned violence directed at communities of color as part of U.S. nation-building.

Invisible, insidious, and assumed, conventional social science research, and by extension, the policies, practices, and investments that are influenced by such research, render white middle-class subjectivities as the gold-standard of achievement, preferred status, wellness, and success. We experience this even within ACEs and trauma-informed discourses, where there is continuous scrutiny on the lives and moves of those most structurally vulnerable, including YPOC, coupled with avoidance and silence of the pathologies of those structurally protected and the systems that protect them. […]

We must embolden outcomes of success beyond those most comfortable or convenient to track and measure, that position the humanity of young people of color as the solution, rather than the problem. To do this, we have to shift the burden of responsibility and change from those of us most structurally vulnerable to those of us most protected and privileged.” 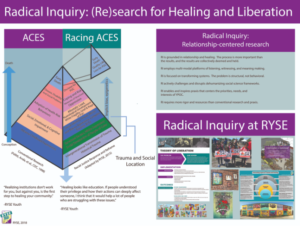