From The New York Times: “The last weeks that Phyllis Funke could legally make decisions for herself, she climbed into bed, planning to stay there for a while. It was the end of 2016 and she felt disillusioned with the election and wounded by her brother’s recent move to Texas.

She wasn’t considering suicide, she said. She just needed to go under the covers until she could figure out how to deal with the rest of her life, so totally alone.

She had credit cards, a car, friends and financial advisers in Maine and New York.

When a caseworker from Adult Protective Services and a city psychiatrist entered her apartment on March 3, 2017, clipping the security chain because she did not answer the door, she was unraveling emotionally and physically, at risk of becoming homeless or worse. She had no idea what price she would pay for the intervention.

‘I’ve been bullied, blackmailed and stripped of the things I need to live, including my money,’ she said on a recent afternoon. ‘Everything has been taken away from me. I have no access to my bank accounts. I don’t have the money to pay for the medications that I’m prescribed. I don’t get mail. I can’t choose my own doctors.’

Ms. Funke had entered the world of adult guardianship. […]

Guardianship was where the breakdowns of modern life — broken families, broken health, broken finances and broken bureaucracy — tumbled together in a system that appeared to bring out the worst in people: secretive, confusing and run by lawyers, with extraordinary powers over vulnerable individuals. It was also the last defense for lives that had come undone.” 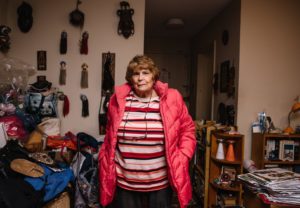