From MilitaryTimes.com: “Despite public pronouncements on their continued focus on preventing veterans suicide, Veterans Affairs officials failed to spend millions available for outreach campaigns in 2018 and severely curtailed their messaging efforts, according to a new report released Monday.

The Government Accountability Office study found that of $6.2 million set aside for suicide prevention media outreach in fiscal 2018, only $57,000 — less than 1 percent — was actually used.

In addition, social media content from VA officials on the subject dropped by more than two-thirds from fiscal 2017 to fiscal 2018. Two planned new public service announcements on the topic were delayed, and no public outreach messages were aired on national television or radio for more than a year.

‘At a time when 20 veterans a day still die by suicide, VA should be doing everything in its power to inform the public about the resources available to veterans in crisis,’ said Rep. Tim Walz, D-Minn., ranking member of the House Veterans’ Affairs Committee. ‘Unfortunately, VA has failed to do that, despite claiming the elimination of veteran suicide as its highest clinical priority.'” 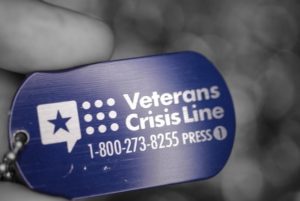