From HUMANE Clinic, Adelaide, Australia: “HUMANE Clinic is preparing to provide an alternative to the challenging and often unfounded perceptions of what is called psychosis in our society: Voices, visions and other realities: Psychosis 365. The intention: to share compassionate and humane ideas, views and thoughts on how we understand common human realities, often referred to as psychosis.

Voices, visions and other realities: Psychosis 365 is not a treatment plan, education plan or other formal concept that anyone should follow. Rather, the project is following the lead of many other projects around the world that share information about the experiences of people in the communities in which we live.

The Plan: Release one video each day 365 days (one whole year of alternatives). Check www.facebook.com/psychosis365/ for updates. Provide views of people with a lived experience, professionals, family or supporters, policymakers and the public in building a resource bank that offers different ideas of what we mean when we say psychosis. Additionally, provide understanding of the many ways people understand and make sense of their reality. We are also excited to show alternative ways that people embrace, manage, live with (or without) their voices, visions and other realities.” 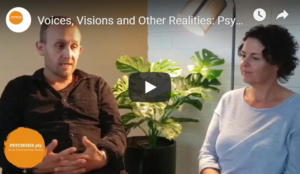