From NPR: “[Conversion therapy] is a widely discredited practice aimed at changing a person’s sexual orientation or gender identity. In most of the country, the therapy is still legal for minors. But advocacy groups are trying to change that by pushing legislation in statehouses across the country to ban licensed mental health professionals from practicing conversion therapy on minors. So far 16 states, Washington, D.C., and Puerto Rico have banned the practice. Colorado is expected to sign a ban into law soon. […]

Suicide as a side effect

At 15, Nunn was convinced he needed to be ‘fixed.’ When he wasn’t, he tried to take his life in the woods behind a friend’s house. A note in his pocket said, ‘God forgive me.’

His suicide attempt is an all-too-frequent side effect of conversion therapy. LGBT youth are already much more likely to try to take their life than their peers are. But kids whose parents try to change their sexual orientation attempt suicide at more than double the rate of their LGBT peers; the suicide rate is nearly triple among young people who also deal with intervention from ‘therapists and religious leaders.'” 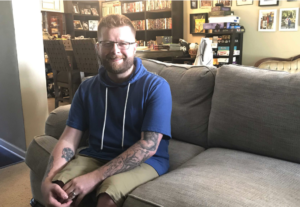