From Curbed: “An Idaho lawsuit concerning how cities across the West enforce laws about sleeping in public—potentially changing how they treat their homeless populations—is now established as precedent. Barring a decision by the Supreme Court to address the case of Martin v. City of Boise, cities will not be able to arrest or punish people for sleeping on public property unless they provide adequate and relatively accessible indoor accommodations.

The ruling means unless there is enough shelter space for the homeless population of a city such as Seattle or San Francisco, city officials can’t enforce anti-vagrancy laws or prohibitions against camping in public parks or sidewalks. The court can’t force cities to build adequate shelter space or homeless housing, but it can make it unconstitutional for them to criminalize homelessness until that burden has been met.

Eve Garrow, a homelessness policy analyst and advocate for the American Civil Liberties Union (ACLU), expects that advocacy groups such as her own will soon engage in proactive public education campaigns to ensure municipalities are aware of the Martin decision and the group’s interpretation of the court ruling.

‘I do believe if cities and counties continue to enforce in a way that’s now clearly unconstitutional, advocacy organizations will engage in litigation to protect the civil rights of these people,’ she says.” 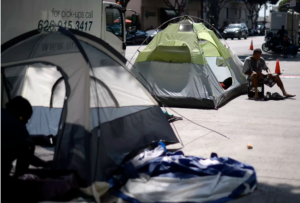