From The New York Times: “Research has shown that postpartum depression is more common in countries with high income inequality, high rates of maternal and infant mortality, and a work-life balance skewed toward work. (Hello, America.)

The clinical definition of postpartum depression is a ‘medical complication of childbirth,’ but this doesn’t take into account women’s emotional lives, and the fact that the way our culture treats some new mothers amounts to abuse.

Pregnant women are often pickled in horror stories about birth, then subjected to unnecessarily intrusive care. Many suffer pelvic trauma; one in three wind up with major abdominal surgery. Then they are sent home with a newborn, typically without support. According to 2015 data, a quarter of women return to work in two weeks. Everyone says that ‘breast is best,’ but new mothers get a decent place to pump at work only if they’re lucky. Most won’t see their doctor again for six weeks. No wonder depression is so common.

As one mother we know who plans to quit her job (because she can afford to) said about the lack of parental support in this country: ‘It’s just so mean.’

A new expensive drug is not enough; we need humane, evidence-based maternity care, respect for the ‘fourth trimester,’ months if not years of paid parental leave, and affordable child care. […]

In the meantime, we fear that Zulresso is just a stopgap, and yet another instance of pathologizing a very sane reaction to our very insane culture.” 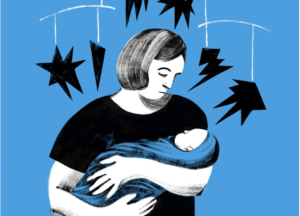