From CBC: “Many medical professionals agree that the language around addiction can affect a person’s recovery, and there is a push to adopt terms that are less dismissive and more human. […]

A recent U.S. study found that terms like ‘opioid addict’ and ‘substance abuser’ were strongly associated with ‘negative explicit bias,’ and concluded they should not be used by either the medical community or the general public.

Language is an important purveyor of social stigma, said Kenneth Tupper, of the B.C. Centre on Substance Use. […]

Tupper said terms such as ‘drug abuse’ or ‘drug abuser’ dehumanize people who are suffering.

Tupper said shifting language can help alter people’s perceptions of marginalized groups, citing as examples how our terminology has changed with respect to Indigenous people, people with disabilities and members of the LGBTQ2 community.

‘It is entirely possible that in the future our children or grandchildren are going to look back and be aghast at how we have treated people who use drugs,’ he said.” 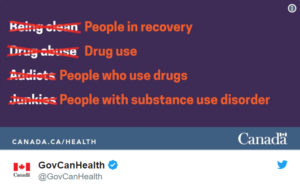